"You must not worry about Santa Claus," wrote President Kennedy. "I talked with him yesterday and he is fine. He will be making his rounds again this Christmas." 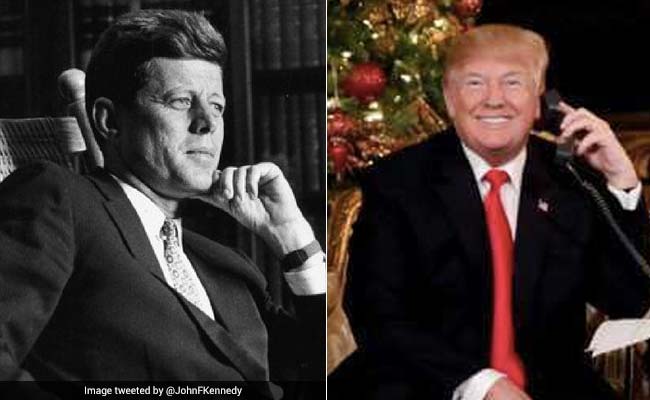 A day after US President Donald Trump asked a 7-year-old if she still believed in Santa Claus, social media is comparing his response to one from President John Kennedy back in 1961, when he assured a little girl that Santa is alive and well.

Mr Trump managed to raise eyebrows around the world when, while answering calls from children anxious about Santa Claus on Monday evening, he asked a 7-year-old girl, Collman: "Are you still a believer in Santa Claus? 'Cuz at seven it's marginal, right?"

Now, a letter by John F Kennedy to a girl named Michelle, shared on Twitter by presidential historian Michael Beschloss, has everyone comparing their vastly different responses.

"I was glad to get your letter about trying to stop the Russians from bombing the North Pole and risking the life of Santa Claus," wrote President Kennedy.

"However, you must not worry about Santa Claus. I talked with him yesterday and he is fine. He will be making his rounds again this Christmas."

JFK's letter to child--"You must not worry about Santa Claus. I talked with him yesterday and he is fine."--1961: pic.twitter.com/T0UD1md1Ik

The letter had everyone comparing JFK and Donald Trump.

What a difference. God help us all

This is how real Presidents respond They don't ruin Christmas for small children.

Contrast this with the ignoramus in the Oval Office talking to the child about Santa https://t.co/3CziHYrbgd

Donald Trump and wife Melania were taking calls from children hoping to get through to NORAD - the American government agency that tracks Santa's movements around the world at Christmas - when the incident occurred.

It is not clear why the POTUS said what he did, because the existence of Santa has never been under any doubt. As the Pentagon's handbook reads: "Historical data and more than 60 years of NORAD tracking information lead us to believe Santa Claus is alive and well in the hearts of people throughout the world."