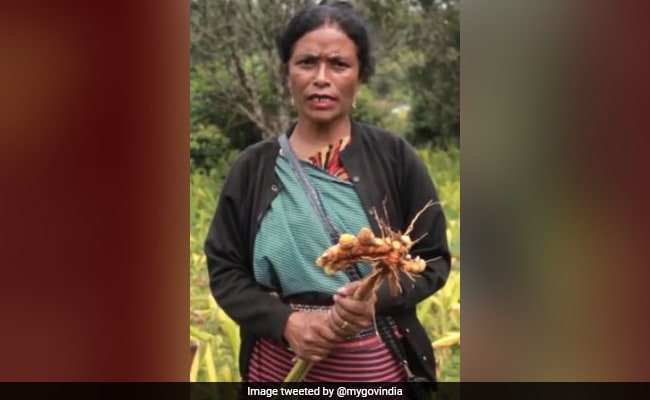 Trinity Saioo is known as 'Turmeric Trinity' for her work.

Union Minister Piyush Goyal hailed the "unsung heroes" of India in a recent video tribute. "Truly deserving of the Padma Shri award, their extraordinary lives and desire to transform the nation will inspire generations to come," he wrote while sharing the video. One such unsung hero on the list is Trinity Saioo, the tribal farmer who has been honoured with the Padma Shri.

Trinity Saioo is one of the 118 recipients of India's fourth highest civilian honour for 2020. The 52-year-old from Meghalaya is credited with spearheading the women-led turmeric farming movement in the state. Her initiative has allowed women farmers to triple their income.

According to The Shillong Times, Ms Saioo has been leading 800 women in the hill state to cultivate Lakadong turmeric - which was not a traditional crop until the former schoolteacher helped increase its popularity. Up until then, the villagers had been growing a variety of turmeric called Lachein, which had less market demand and poor curcumin content.

In 2003, Ms Saioo planted Lakadong turmeric and saw her earnings double. The next year, she convinced others to do as well.

"Trinity Saioo a progressive farmer who led hundreds of farmers in Jaintia Hills of Meghalaya to cultivate & boost the popularity of indigenous high curcumin Lakadong variety of turmeric," wrote the Spices Board (Ministry of Commerce and Industry, Government of India) in a tweet.

Trinity Saioo a progressive farmer who led hundreds of farmers in Jaiñtia Hills of Meghalaya to cultivate & boost the popularity of indigenous high curcumin Lakadong variety of turmeric was conferred with the prestigious Padma Shri for her distinguished service #TurmericTrinitypic.twitter.com/6P68WGylD2

She is known as 'Turmeric Trinity' for her work.