The toddler is seen hugging his golden retriever, who appears visibly distressed by sounds of a thunderstorm. 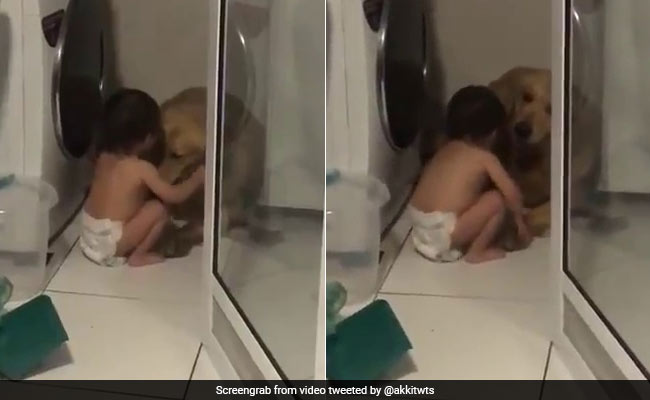 A video of a toddler comforting his distressed dog is going viral online.

A video that's giving the Internet warm fuzzies at the moment shows a toddler comforting his pet dog during a thunderstorm. In the one-minute-long video, the toddler is seen crouching next to his golden retriever, who appears visibly distressed by sounds of a thunderstorm. The two appear to be hiding out in a washroom as the toddler tries to comfort his pet by gently stroking his head and hugging him.

Fear of thunder is common in dogs, often triggering anxiety and panic, according to Pets WebMD.

The heartwarming video of the toddler and his fur buddy, which appeared on Twitter three days ago, has already won thousands of hearts. "This little guy comforting his buddy during a thunderstorm is the best thing you'll see today," wrote the Twitter user who shared the clip. Watch it below:

This little guy comforting his buddy during a thunderstorm is the best thing you'll see today ????????????
pic.twitter.com/HD6rdLuE7z

Since being shared online, the video has collected over 8 lakh views and more than 67,000 'likes'. In the comments section, several social media users have praised the child while others have remarked on the bond between babies and dogs. Some even hailed the toddler as a hero in diapers after watching the wholesome video.

So much compassion in that little body! ❤️❤️❤️

Something in my eye. Kids and dogs are the best things ever. That dog will one day comfort that wee guy.

The video had also appeared on Reddit two weeks ago, where it collected more than 1,000 upvotes.

What do you think of this clip? Let us know using the comments section.