Three Signs That You Grew Up Indian-American, Courtesy Kamala Harris

Kamala Harris's mother, Shyamala Gopalan, was born in Chennai and immigrated to the US. 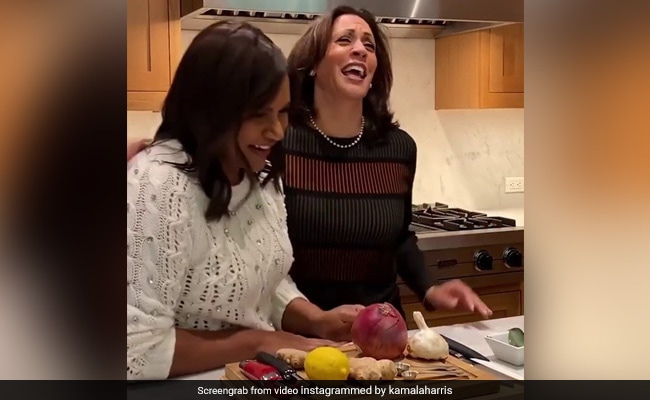 Kamala Harris and Mindy Kaling came together to cook masala dosa in 2019.

Senator Kamala Harris's Instagram video on three signs that you grew up Indian-American was met with delight and amusement on the photo and video sharing platform. Ms Harris, whose mother was from India and father from Jamaica, made history when she accepted the Democratic nomination for vice president. She is the first Black woman and the first Asian-American woman to be selected as the vice presidential nominee of a major party in the US.

On Tuesday, Kamala Harris shared a video titled "3 Signs You Grew Up Indian-American".

The video features snippets from her 2019 cooking session with Indian-American actor Mindy Kaling. According to Ms Harris, the three signs that one grew up in an Indian-American household include:

1.Spices in Taster's Choice jars. In the video, Ms Harris can be seen picking up one of the jars and saying that this was "literally" what her mother used as well.

2.Everyone is uncle or auntie. The California senator can be heard asking Mindy Kaling not to call her "auntie" - shortly before greeting her father by calling him "uncle".

3.Lots of dal: Last but not the least is the point she also emphasised in her caption - lots of dal. Watch the video below:

Since being posted online, the Instagram Reels video has been viewed 1 million times. It has also garnered over 1,800 comments and 93,000 'likes'.

"I love this. Trump doesn't know what he's DAALing with you on the ticket," quipped one person in the comments section.

"I love dal. Staple of my diet," another agreed.

Kamala Harris's mother, Shyamala Gopalan, was born in Chennai and immigrated to the US for a doctoral programme at the age of 19. In her vice-presidential acceptance speech, Ms Harris had said that her mother raised her and her sister "to know and be proud of our Indian heritage." Her speech had also included another shout-out to her Indian roots - a special mention to her "chithis" - a Tamil word which means "aunts".