A photographer who captured the beautiful moment, quite by chance, now hopes to find the couple pictured 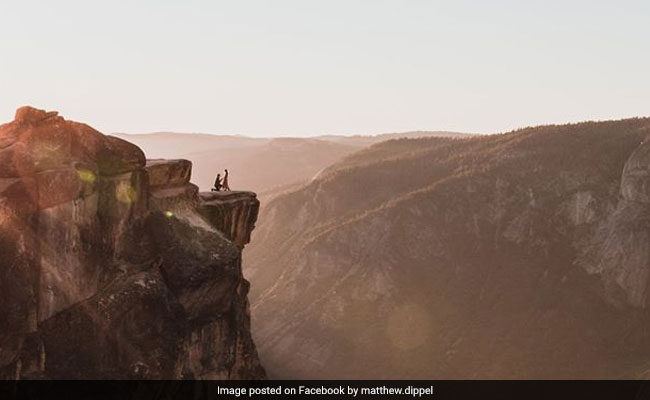 Internet sleuths are trying to find the couple that Matthew Dippel photographed.

On October 6, Matthew Dippel, a photographer in the US, accidentally witnessed a romantic proposal taking place at Taft Point in Yosemite National Park. Naturally, he took his camera out to capture the beautiful moment. In hopes of finding the couple, he shared the picture on social media - and though his search has gone viral, nobody has yet found the couple pictured.

According to BBC, 24-year-old Mr Dippel was standing with other photographers and tourists when he took the shot that has now gone viral.

"I had everything all ready to go on my camera so I just had to snap away," he said. "But the couple walked out before he did, so I just was in the right place at the right time.

After taking the picture, Mr Dippel raced around to the point in hopes of finding the couple, but he arrived to find dozens of people, including three or four other couples dressed up, all ready to pose.

So, on October 17, he shared the beautiful photograph he captured on Facebook and Twitter, hoping that someone could help him in identifying the couple.

"Alright Internet I need your help. Help me find these two. This was taken at Taft Point, in Yosemite National Park on October 6th, 2018. I took this photo and would love for them to find it," he wrote.

Though his photograph has gone viral with over 15,000 'shares' on Facebook and over 1.4 lakh 'retweets' on Twitter, nobody has yet managed to identify the mystery couple of Yosemite Park.

The comments section of his photograph has been filled with a ton of possible candidates unearthed by Internet sleuths, but none so far have been a match.

"I still have hope, because it continues to gain attention and hopefully it'll find them. I'm honestly surprised it hasn't already!"