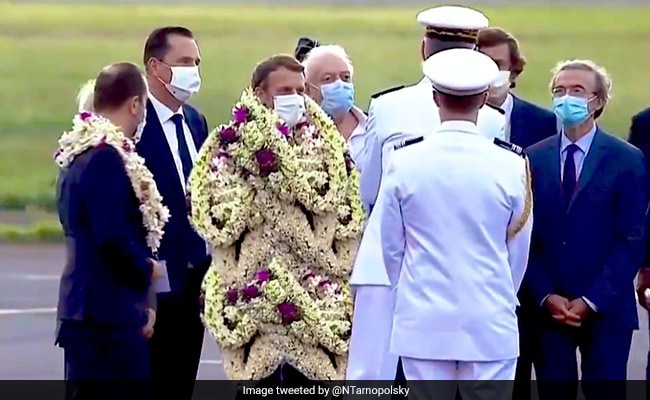 A Photoshopped image of French President Emmanuel Macron is viral on social media.

An image doing the rounds of social media shows French President Emmanuel Macron covered in wreaths or 'leis'. The picture in question is from the leader's recent visit to French Polynesia, an overseas collectivity of France that comprises more than 100 islands in the South Pacific. The image has gone inspired a number of memes on Twitter, but a little digging reveals it is actually Photoshopped.

The fake image shows Mr Macron covered in flowery loops that extend till his knees, almost burying him, it seems. Sharing the image on Twitter, Noga Tarnopolsky, a reporter said, “President Macron is turned into a human wreath during his official welcome to French Polynesia.”

However, Twitter users were quick to point out that Ms Tarnopolsky had fallen prey to a fake image and that the president was not covered in as many wreaths as was seen in the picture. While he was welcomed with floral garlands, they were much fewer in number.

President Macron is turned into a human wreath during his official welcome to French Polynesia. pic.twitter.com/7q9fiULEUN

Explaining that the reporter had shared an edited image, a user named Anthony Stewart, whose bio says that he works for ABC International / Radio Australia, wrote, “I think this is image is a 'lei'.  Nice photoshop job…” By using the word “lei”, Mr Stewart was presumably making a pun regarding the term that is used to describe garlands or wreaths in Hawaii and across Polynesia.

Here is the vision. HT @liamfoxabchttps://t.co/E02qhMC4e8pic.twitter.com/tThpLLceAo

Another user too replied to Ms Tarnopolsky's tweet with the unedited, original image. Sharing it, the user said, “This is the real picture, but this one is fake!”

This is the real picture, but this one is fake! pic.twitter.com/p7OqxOt4Vv

A different picture of Mr Macron was shared by another user, in which the president is seen with far fewer garlands. The note along with the photo said, “I'm pretty sure he didn't. This image looks much more manageable.”

I'm pretty sure he didn't.???? This image looks much more manageable. pic.twitter.com/i7Rk4eeq57

Moreover, footage of Mr Macron vising former colonies in French Polynesia, shared by Euro News, also confirms that the viral image is doctored. The video shows him wearing a lot of wreaths around his neck, but they do not cover his arms completely as in the edited picture.