Over 2.7 million views for this video - and counting. 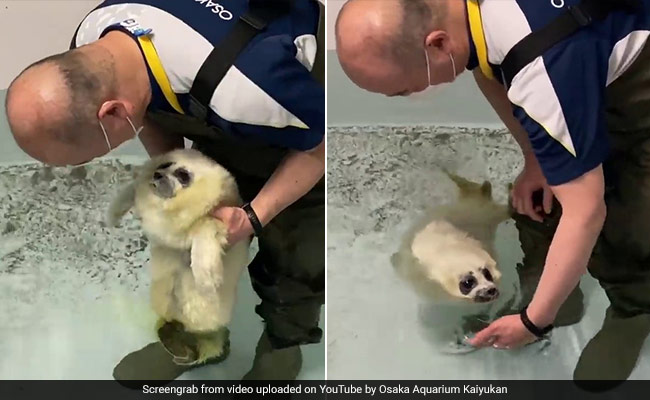 A baby seal gets its first swimming lesson at an aquarium in Japan.

One of the cutest corners of the Internet has to be the place that consistently dishes out cute animal videos. At the end of a bad day, watching a few videos of kittens, dogs or any of our other favourite animals being their natural self can prove to be quite relaxing. The latest animal video that has grabbed the Internet's attention is the clip of a baby seal having its first encounter with swimming. The video of the little one being dipped in a pool of water for the first time has gone viral on social media thanks to just how cute the animal looks.

The video was originally shared by the Osaka Aquarium Kaiyukan of Japan on their official YouTube channel in May, but grabbed the Internet's attention recently. It features an instructor holding the baby seal and gently dipping it by the tail end into a pool. The seal initially stays still, moving only to look up at the instructor before it begins to use its arms in swimming-like motions. At this point, the instructor lowers the body of the seal into the water, placing his hand around the nape and chest area of the seal as it begins to swim. Soon the seal takes to the water confidently, and at one point even swims in between the instructor's legs as he watches on.

After a successful maiden swim, the seal is taken out of the pool and towel-dried by the instructors. At this point, several users who saw the video were willing to admit that this seal swimming had to one of the cutest sights on the Internet.

The video made it to Twitter thanks to former American basketball player Rex Chapman who shared a short clip on his feed. Along with it, he wrote, "This baby seal being introduced to water for the very first time is the sweetest thing you'll see today…"

This baby seal being introduced to water for the very first time is the sweetest thing you'll see today…pic.twitter.com/cM76ErDQCn

The video has garnered over 2.7 million 'views' on the mirco-blogging site since it was uploaded on Wednesday. Reacting to the clip, one user said, "I like the way he looks to his human assistant for reassurance."

I like the way he looks to his human assistant for reassurance.

Praising the instructor, another viewer wrote, "I don't think I have even seen a human baby handled more gently during an introduction to water!"

I don't think I have even seen a human baby handled more gently during an introduction to water! Sweet is exactly the word.

Responding to the video, one YouTube viewer said, "An earless dog with fins is what that is." Another comment said, " I don't know why this was in my recommended feed but I would die for that seal."

STOP DOING EVERYTHING AND LOOK AT THIS BABY SEAL???? https://t.co/nZqYBiF2wu

the way the little ploof keeps looking up at the human for reassurance (and getting it) ???? https://t.co/yHkEmdJOhM

Tell us what you think of the cute seal's first brush with swimming.