"It is still freaking me out!" wrote one person in the comments section 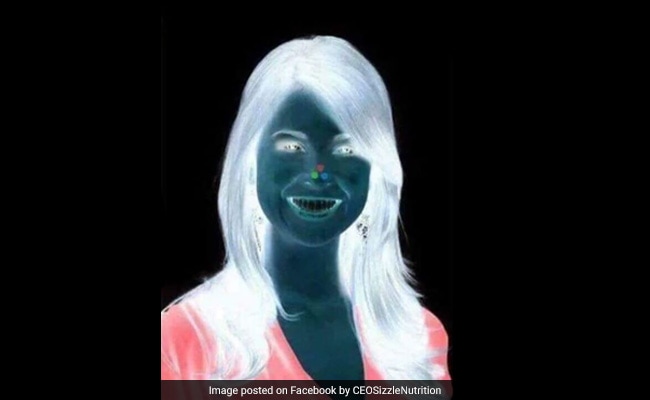 This optical illusion will trick your brain into seeing a brunette woman on a wall.

An optical illusion that seems to be straight out of a horror movie is creeping netizens out. This optical illusion instructs people to stare at a red dot on a photograph of a woman's face for 30 seconds before looking away. The image has been overlaid with a negative filter, according to the Sun. This tricks your eyes into seeing colours that are not actually there, which means that when you look at a blank surface after staring at the photograph, you should be able to see the woman's face in colour with brunette hair.

Sounds spooky, right? Take a look at the optical illusion below. Stare at the red dot for 15 to 30 seconds. Then look at a blank wall and blink rapidly.

The photograph has collected a number of freaked-out comments since being posted to Facebook.  It has also amassed over 1.3 lakh 'shares' and 16,000 'likes'.

"It is still freaking me out!" wrote one person. "Is this the creepiest??? It is amazing!!" said another, while a third added "Omg! Unbelievable."

So how does this optical illusion work?

Telegraph explains that it works by using a technique called 'negative afterimage'.

Humans have three colour channels - grayscale, red and green and blue and yellow - which allow us to code colour in any environment. When we look at any one colour for too long, the cells in that colour channel increase in activity for some time before 'weakening'.  When you look away, you see a 'negative afterimage' that are on the opposite end of the spectrum to the original.

"When you then direct your gaze at a uniform background - let's say a grey wall - then what happens is that the cell doesn't return to its resting activity, it goes much lower than that," Dr Juno Kim from the University of NSW School of Optometry and Vision Science told Daily Mail.

"It's that decline - the weakening of the yellow code - that codes for the opposite colour to become stronger, so you'll see blue."

Therefore, the image that people see after looking at the photograph is similar to this:

What do you think of this optical illusion? Let us know using the comments section.