Rosie and Olive are often spotted playing and snuggling together 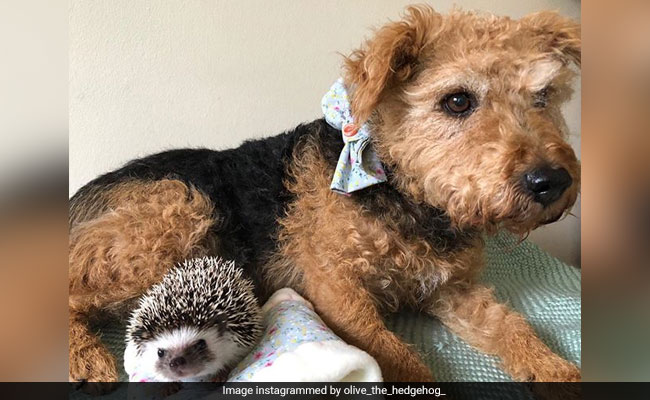 Olive the hedgehog and Rosie the dog are best friends.

Rosie the dog and Olive the hedgehog make for unlikely best friends, but they are lighting up Instagram with their cuteness. The adorable duo were adopted by physiotherapy assistant Victoria Wright and are now inseparable, despite initial misgivings that Rosie might be of too nervous a disposition to make friends with the hedgehog.

According to the Independent, Doncaster resident Ms Wright adopted Welsh terrier mix pooch Rosie from a local shelter in April 2014. She adopted Olive the hedgehog in July this year, and an Instagram account she created for the two has delighted thousands of social media users.

I wouldn't be a proper little sister without annoying the hell out of Rosie. ???????????? #SheLovesMeReally

"Rosie had a really tough beginning. She was found as a stray in a bad way. She had barely any fur on her ears and scarring on her nose," says Ms Wright.

According to a video by Press Association, though she is still quite nervous, Rosie has become more confident since Olive moved in. The African pygmy hedgehog and Rosie are often spotted snuggling and playing together.

Look how majestic me and my big sister look. ???????????? #UnlikelyAnimalFriends

Their touching friendship has even helped Ms Wright, 28, address her own problems with anxiety.