This Company Is Selling Used Tissues For Over Rs 5,000. No Kidding

"We believe using a tissue that carries a human sneeze is safer than needles or pills," writes Vaev Tissues on its website 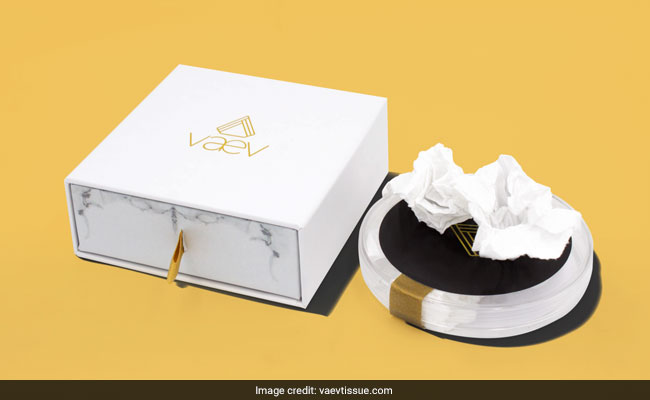 The used tissues come packaged in a petri dish with a gold tape.

This is nothing to sneeze at - or is it? A Los Angeles-based company is selling used tissues to customers in an effort to allow them to decide when they want to get sick. "We believe that when flu season comes around, you should be able to get sick on your terms. We believe using a tissue that carries a human sneeze is safer than needles or pills," writes Vaev Tissues on its website.

The sneeze-filled tissues retail at $79.99 - that's approximately Rs 5,700. And, according to Fox News, they have been sold out online for months.

On Twitter, the reactions have been less than enthusiastic, with many calling the product "disgusting".

Vaev who do you think you are? $80 for used tissues that I have to stuff up my nose so I don't get sick. Smh I'll stick with brand new Kleenex. #GoodDayDC

#BeatTheColdBy purchasing used tissues! $80 but I'll sell ya mine for $40 pic.twitter.com/6PCqKZH7sD

@wfaaweather I work in an elementary school; my new early retirement plan is to sell used tissues!! Currently accepting bids on colds, flu and stomach virus!!

"The simple idea is you choose now to get sick, with the idea in mind that you won't get sick with that same cold ... later," said Oliver Niessen, the 34-year-old founder of the company, to Time.

However, according to Charles Gerba, professor of microbiology and environmental sciences at the University of Arizona, the problem is that this is not how viruses work.

"There's a lot of things wrong with that," he tells Time. "There are more than 200 types of rhinoviruses, so you're going to have to shove about 200 tissues up your nose each time to get a different one. But getting inoculated from one doesn't protect you against all the others."

"That's why we've never had a vaccine for the common cold," he says. "How do you make a vaccine against 200 different viruses?"

What do you think of the product? Let us know using the comments section below.