This Bread-Making Fail Has Viewers In Splits. 9 Million Views For Video

9 million views for this baking fail. 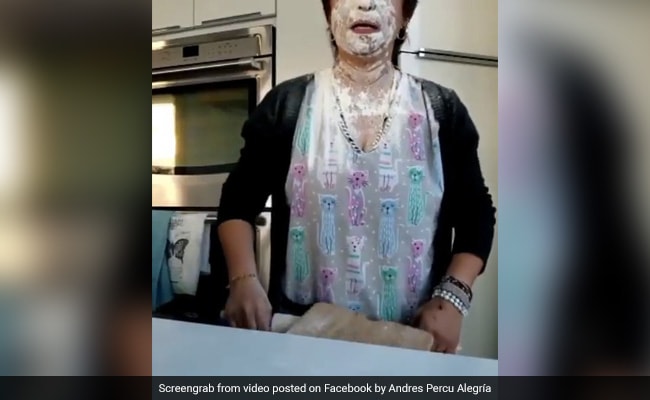 A woman's bread-making tutorial ended with flour covering her face.

Baking is not always easy - ask this woman whose bread-making tutorial ended with her face covered in flour. Andres Percu Alegria from Santiago, Chile, shared a video of a woman's attempt at baking that went hilariously wrong when she tipped her pastry board. The video has left viewers in splits, collecting over 9 million views since it was posted on Facebook last Wednesday.

In the video, the woman is seen talking in Spanish while she works on her dough. After kneading the dough, she lays it on the wooden pastry board and begins rolling it out with a rolling pin. Unfortunately, the pastry board is not completely on the table. When her hand reaches the part that is not on the table, the weight of the rolling pin tips the pastry board forward and sends a plate of flour flying into her face.

The video - captioned "the new way to make bread" - ends with the woman asking the person recording to stop filming.

The bread-making fail has gone viral on Facebook since being shared. Along with a whopping 9 million views, it has also collected over 5 lakh 'shares' and more than 76,000 amused comments.

Baking has emerged as a popular hobby at a time when millions around the world are confined to their home to contain the spread of coronavirus. Plenty of other baking horror stories have flooded social media of late. Recently, a Twitter thread with people sharing their own baking fails had gone viral on the microblogging platform:

Hello. You may win most-failed banana bread, but I am champion of most-failed normal bread. I give you this: pic.twitter.com/X6OLr9DAF8

As failed as my bunnies? pic.twitter.com/I3U0XSGMBe

looks better than some cupcakes I once tried pic.twitter.com/9KuEArVEj3

What do you think of the video?