Billionaire Takes 3,000 Workers On A Free Trip To Madrid 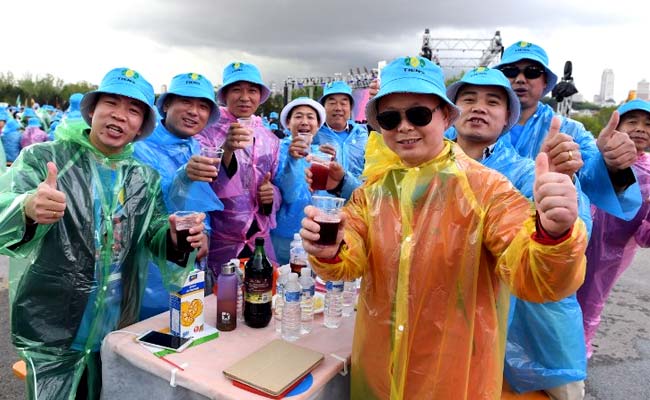 Employees of Chinese company Tiens pose as they drink 'sangria' during a reception in Madrid on May 6, 2016. (AFP Photo)

Madrid: The billionaire founder of Chinese conglomerate Tiens Group treated 3,000 of his top salespeople on Friday to a traditional Spanish paella dinner during a free Madrid trip that also included a bullfight and a tour of King Felipe VI's Royal Palace.

The smiling crowds washed down heaping plates of paella with sangria at a massive spread of picnic tables in a riverside park during the event footed by Li Jinyuan and organized by China's U Tour travel company.

Spain was selected for this year's bonus trip for the workers because they "are fond of Spanish history and culture, and its delicious cuisine and its soccer," said Li Zhongmin, the company founder's son.

The trip came a year after Li took 6,400 employees to France.

The employees saw a bullfight in a town near Madrid complete with Spanish horse riders and flamenco dancers and then swigged sangria after an employee awards presentation followed by paella served from huge "paellera" pans used to cook and serve the dish.

After Madrid, they were scheduled to head to Barcelona for the rest of their trip.

Zhang said another trip is expected to take place next year, but the destination hasn't been set yet.
Comments
Tiens Group philanthopyLi Jinyuan distributes Paella