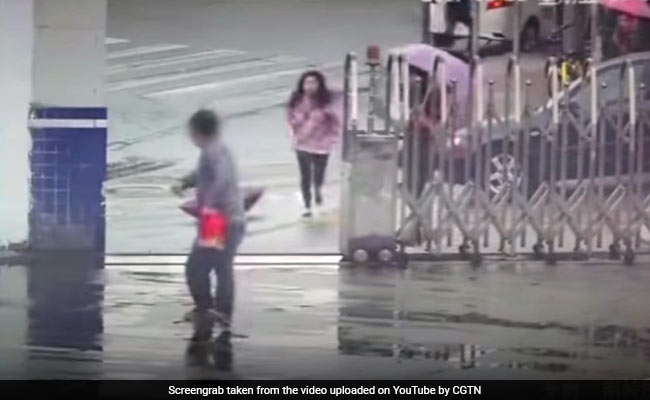 New Delhi: A life of crime doesn't pay and it took less than 30 seconds for a thief in China to learn that lesson. Surveillance footage has emerged showing a man robbing a woman waiting to cross the road in the city of Shenzhen, in China's Guangdong province. The not-so-smart thief grabs the woman's mobile phone, runs through traffic and straight into a police station. The brave woman chases after the thief, stumbles, but manages to get up and continue chasing him. Upon reaching the police station, she shouts for help. A police office promptly rushes out and arrests the man.

According to People's Daily China, the man was arrested "10 seconds after the crime." He apparently did not know the area particularly well and was unaware he was running into a police station.

"At one point, he reached a dead end. He ran into a courtyard not knowing it was a police station. He was arrested right on the spot," China Global Television Network reported a police officer saying.

On social media, many people said what happened was truly an act of karma:

@PDChina Karma at it's finest

@PDChina Practically put the handcuffs on himself

One person laughed that the thief's quick arrest had to have set some kind of record: