They Were Trying To Take Pics Of A Tiger. Watch What Happened Next

"We need to coin a word for forest/wildlife idiots. These people are plain lucky to be alive," wrote one viewer. 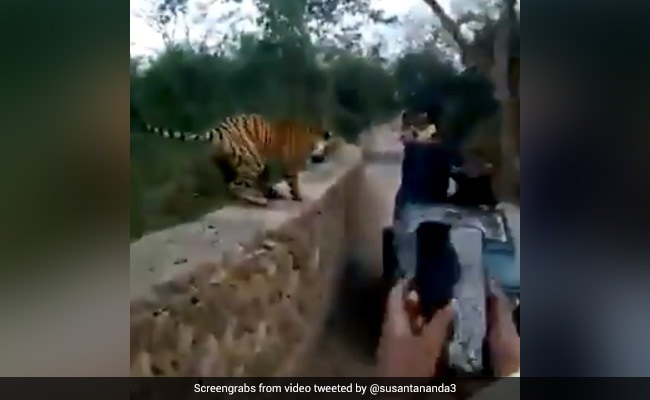 A group of tourists was seen poised with their phone cameras to take photos of a tiger.

A hair-raising video shows the moment a group of tourists came too close to a tiger for comfort. The 15-second footage shows tourists in two cars waiting to take photos and videos of a tiger standing on the other side of a low wall. However, their excitement turned into shock when the big cat jumped onto the wall separating them.

The video was shared on Twitter by Indian Forest Service officer Susanta Nanda, who criticised the behaviour of the tourists.

"Ye raha, ye raha (it's here)," one member of the group was heard saying in Hindi as the tiger approached them. However, the group's excitement quickly turned sour when the tiger jumped gracefully onto the wall, standing just a few feet away from them.

Some members of the group were heard screaming while others shushed them with "chup, chup, chup (quiet!)"

Luckily, the tiger did no worse than scaring the tourists before walking away. Nevertheless, several viewers on social media criticised the group for disturbing wildlife.

"Idiotitis... When human brain shuts down & mouth keeps talking," wrote IFS Susanta Nanda. "Appreciate the anger management of the tiger. But that can't be guaranteed in future."

Appreciate the anger management of the tiger. But that can't be guaranteed in future. pic.twitter.com/dSG3z37fa8

The clip has been viewed nearly 10,000 times on the microblogging platform since being posted yesterday.

"Our intrusion has crossed all limits," remarked one Twitter user.

"We need to coin a word for forest/wildlife idiots. These people are plain lucky to be alive," said another.

When will we understand that PLASTIC KILLS!!! pic.twitter.com/AeaFCugEvh