These Small Animals Took On A Pride Of Lions - And Won. Watch Crazy Video 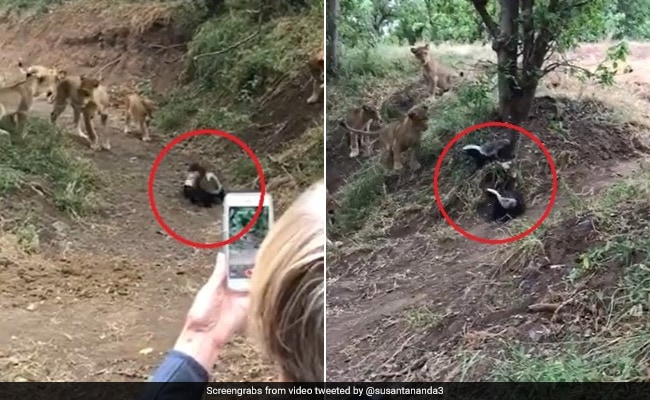 A pair of honey badgers take on a pride of lions.

It is not for nothing that the honey badger has earned the reputation of being the most fearless animal in the world. Despite its small size, this carnivore is known for its ferocious defensive abilities and aggressive nature. According to the Independent, honey badgers have been described in the Guinness Book of Records as the "most fearless animal in the world" and can even fight off much larger predators like lions and hyenas. An extraordinary video that is going viral online shows a pair of honey badgers doing just that.

In the video, which has resurfaced on social media after being shared this morning by Indian Forest Service officer Susanta Nanda, a pair of honey badgers can been seen taking on a pride of lions. Despite being outnumbered by animals much larger than themselves, the honey badgers were filmed winning the battle and forcing the big cats to retreat.

According to the Daily Star, the video was recorded from inside a truck by a tourist in Zambia, named Abdulaziz Adam. Mr Adam had shared the video on Facebook, where it had gone viral with thousands of views. He said that it was taken at the Luangwa National Game Park in Eastern Zambia.

"The honey badger is known  for its strength, ferocity and toughness. It is known to savagely and fearlessly attack almost any other species when escape is impossible, reportedly even repelling much larger predators such as lion and hyena," wrote Mr Nanda while sharing the video. Watch it below:

Pride of the lions pride taken to dust????

The honey badger is known for its strength, ferocity and toughness. It is known to savagely and fearlessly attack almost any other species when escape is impossible, reportedly even repelling much larger predators such as lion and hyena. pic.twitter.com/7iyz0hPHxN

Since being posted on the microblogging platform this morning, the video has collected over 5,000 views and a number of amazed comments.

"Honey badger don't care," wrote one person in the comments section, referring to a popular slogan that has become associated with these fearless animals.

"Size is nothing in front of bravery and self-defense skills," another said.

Honey badgers can be found throughout most of sub-Saharan Africa, Saudi Arabia, Iran, and western Asia. According to South African Country Life, their body is well designed to fight off predators. They have sharp claws and incredibly strong jaws, coupled with thick skin.