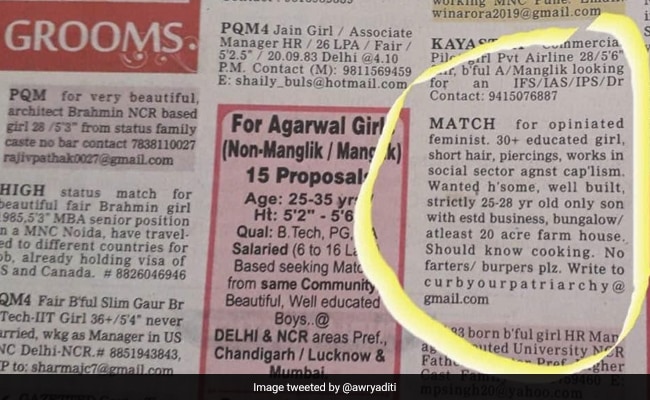 A few days ago, Indians woke up to find a curious ad in the matrimonial section of a leading newspaper. The ad, seeking a groom for an "opinionated feminist with short hair and piercings", quickly went viral on social media for its unusual nature. It said that the woman, over 30 years of age and educated, worked in the "social sector, against capitalism" and sought a "handsome, well-built" groom strictly between 25 to 28 years of age. Other requirements: he should be the only son with an established business, a bungalow or at least a 20 acre farmhouse.

Comedienne Aditi Mittal shared the matrimonial ad on Twitter, where it quickly went viral, garnering a number of amused responses.

Did someone put out a matrimonial ad for me pic.twitter.com/DKsbk0iijT

Actress Richa Chadha was among those who reacted to it.

While many expressed their amusement at the unusual wedding ad, others raised doubts about its authenticity. Now, a BBC report has confirmed what was long suspected - the ad is nothing more than a prank.

BBC reached out to the email address mentioned in the ad (curbyourpatriarchy@gmail.com) and managed to track down the "opinionated feminist" - a woman who does not want to reveal her real name, instead adopting the pseudonym "Sakshi".

The report revealed that the wedding ad evolved from a prank between Sakshi, her brother Srijan and her best friend Damyanti (also not their real names).

"It was a small prank we played for Sakshi's 30th birthday," said Srijan.

"Turning 30 is a milestone, especially because of all the conversation in our society around marriage. As you turn 30, your family and society start putting pressure on you to get married and settle down," he said.

The night before Sakshi's birthday, her brother gifted her a scroll with only the email address that would later appear in the matrimonial.

"When I unrolled it, it had the email address - curbyourpatriarchy@gmail.com - and the password. I had no idea what I was supposed to do with that," Sakshi told BBC. "In the morning, Srijan brought me a copy of the newspaper with the page opened to the matrimonial columns and we had a good laugh. It was a fun prank."

But the prank also had its downside - Sakshi says she received a number of abusive emails.

She was called a "gold-digger", a "cougar" and "toxic", among other things. One woman threatened  that her brother would "throw her off the 78th floor", while another person wrote "all feminists are idiots".

For Sakshi, the ad was a "satirical statement" on society's patriarchal notions.

"You can't say such things out loud. Men ask for tall, slim beautiful brides all the time, they brag about their wealth, but when the tables are turned, they can't stomach it. How could a woman set such criteria?" she said.

"Do you send such triggered emails to all the sexist, casteist 'bride wanted' adverts that appear in the papers everyday? If not, then you need to curb your patriarchy"