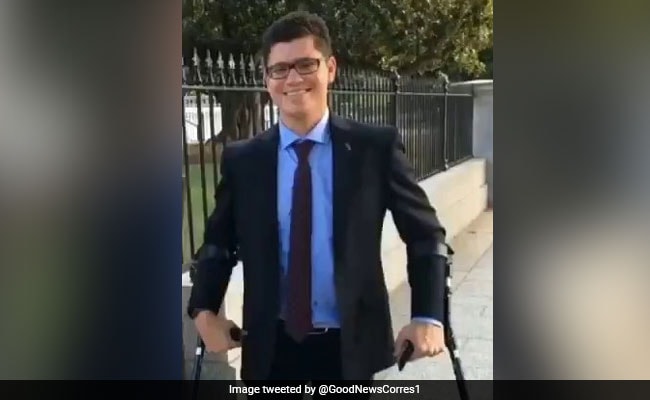 A letter from Matthew Walzer inspired a line of easy-entry footwear from Nike.

Nike has unveiled its first completely hands-free sneaker: the Nike Go FlyEase. Nike FlyEase is an easy-entry footwear system designed by Tobie Hatfield that was launched in 2015. Over the last half decade, Nike experimented with a variety of no-lace solutions ranging from Velcro to zippers to cable dials before launching its first hands-free sneaker - but the inspiration for this "accessible and empowering design" came from a letter written to the company in 2012.

In 2012, Matthew Walzer - a 16-year-old with Cerebral Palsy - contacted Nike, telling them that it was his dream to go to college without worrying about someone having to tie his shoelaces day in and day out. Mr Walzer was born two months premature, with under-developed lungs that led to Cerebral Palsy, according to Nike. While he overcame many physical obstacles, tying his own shoelaces remained a challenge.

"At 16 years old, I am able to completely dress myself, but my parents still have to tie my shoes. As a teenager who is striving to become totally self-sufficient, I find this extremely frustrating and, at times, embarrassing," Matthew Walzer wrote.

The teen's letter inspired Tobie Hatfield to create a shoe that would address his specific need. In 2012, Nike delivered a Hatfield design to Mr Walzer for wear testing, but Mr Hatfield continued to work on designing shoes to help other people with special needs. This journey led to the development of Nike FlyEase - a range of no-lace footwear launched in 2015 that on Monday introduced Nike Go FlyEase, its most innovative design to date.

"Your talented team of designers has thoughtfully created a shoe that, for the first time in my life, I can put on myself. When I put the shoes on every morning, they give the greatest sense of independence and accomplishment I have ever felt in my life," said Mr Walzer at the time.

Then 16-year-old Matthew Walzer, who has Cerebral Palsy, wrote to Nike in 2012 saying he was disappointed no athletic brand had thought to create sneakers adapted for people with disabilities like him. (1/2) pic.twitter.com/fFiNMvVjry

The story behind the development of this sneaker has won Nike a lot of praise and goodwill on social media.

"As someone who has Cerebral Palsy, this moved me to tears. Thank you Matthew and Nike for making this possible!! Simply amazing," wrote one Twitter user.

"What an awesome story," said another.

According to Nike's website, the Go FlyEase utilises a "bi-stable hinge that enables the shoe to be secure in fully open and fully closed states."