Xiao-Bao waited patiently for his owner every day in the hospital's lobby. 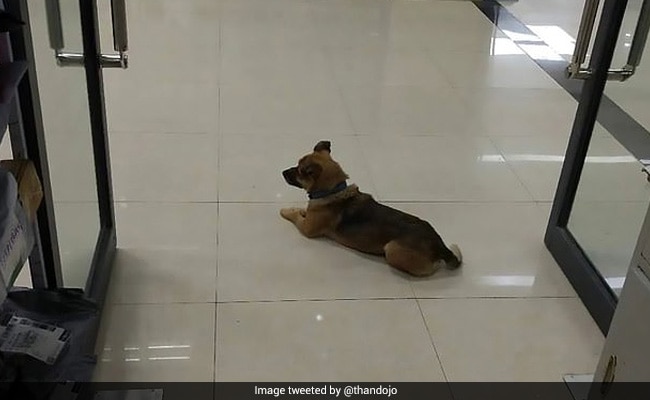 Xiao-Bao returned to the hospital's lobby every day for three months.

A devoted dog waited for three months at a hospital for his owner, unaware that he had died from coronavirus. The moving story of Xiao-Bao's long wait was shared on social media has left people teary-eyed. It has been compared by many to the touching tale of Hachiko - the dog who waited for his owner at the same spot for over nine years.

According to the New York Post, seven-year-old Xiao-Bao waited patiently for three months at China's Wuhan Taikang Hospital, not understanding that his owner had died of coronavirus just five days after being admitted. The virus first emerged in Wuhan late last year.

Unaware that his owner would not return, the loyal dog waited at the hospital's lobby every day, and staff members soon developed a soft spot for him. For weeks, therefore, the pooch was fed by passersby, until a woman who runs a supermarket in the building decided to look after him.

"I first noticed the little dog when I returned to work in the middle of April. I called him 'Xiao Bao'," said Wu Cuifen, according to the Daily Mail. "They told me Xiao-Bao's owner, a pensioner, was admitted with the coronavirus. Then he passed away, but Xiao-Bao didn't know and just stayed in the hospital looking for him."

Loyal #dog waits at a #Wuhan hospital for 3 months after his owner dies from covid-19
7-yo dog Xiao Bao waited patiently for his owner at Wuhan hospital.Staff at Wuhan Taikang Hospital fed Xiao Bao
Xiao's owner died 5 days after being admitted pic.twitter.com/H31Ls2Dsrh

After being shared on Chinese social media platforms, Xiao-Bao's story has now gone viral on Twitter and touched the hearts of many.

Many social media users were reminded of Hachiko after reading Xiao-Bao's story.

Hello there "brother" of hachi...

According to Ms Cuifen, she grew familiar with the dog and brought him into her shop in April as China began easing its strict lockdown. "Every morning when I opened up, Xiao-Bao would be there waiting for me. He saw me off at the end of each day," she said.

In fact, the loyal dog kept returning to the hospital even after being deliberately dropped off far away.

Staff said Xiao Bao refused to leave. Even when they deliberately dropped him off somewhere far away, he would make his way back to Taikang Hospital and patiently wait for his owner pic.twitter.com/204kAG9eEi

In May, after receiving complaints from several patients, Xiao-Bao was handed over to Wuhan Small Animal Protection Association by hospital nurses. He has been treated by vets and is now waiting to be adopted into his forever home.