The dubious webpage asked visitors to take a survey and also forward the same message to 20 of their friends. Sound suspicious? 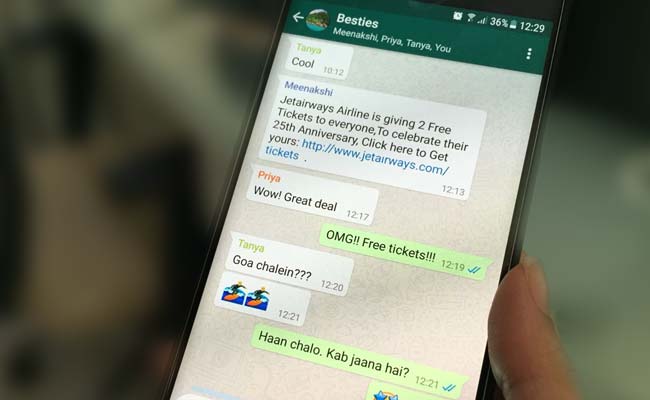 New Delhi: There's nothing better than the lure of free stuff. So, when several people received a forwarded message about Jet Airways seemingly offering free tickets to people, there was quite a flurry among WhatsApp groups. As it turns out, the message is 100% fake - as confirmed by Jet Airways in a tweet on Wednesday.

The message claimed the airline was offering two free tickets to everyone to celebrate their 25th anniversary. The forward was accompanied by a link that directed people to the page supposedly offering the free tickets. However, before giving away the tickets, the page asked visitors to take a survey and also forward the same message to 20 of their friends. Sound suspicious?

Like many similar messages in the past, this too was fake.

On Wednesday morning, the airline clarified on the viral message.

"#FakeAlert There's a fake link being circulated regarding ticket giveaways for our 25th Anniversary. This is not an official contest/giveaway and we advise caution," Jet Airways tweeted.

#FakeAlert There's a fake link being circulated regarding ticket giveaways for our 25th Anniversary. This is not an official contest/giveaway and we advise caution. Genuine contests & giveaways are hosted only on our verified social media accounts, indicated with a blue tick. pic.twitter.com/NvJrFaq3aL

In fact, a closer look at the URL would reveal how the word "airways" in the link was spelt with a special character replacing the letter 'i' - which many perhaps missed.

Promoted
Listen to the latest songs, only on JioSaavn.com
Responding to the airline's statement, many Twitter users revealed that they too received the message, with some even clicking on the dubious link.

I got this message for the whole day......and tired of replying them....few claimed to have got the tickets pic.twitter.com/BOpFRJJALM

Usually I don't have the habit of responding to such messages, but I did to this because I received the message from a reliable friend. While trying I could know that it was fake. The company should find out the person or persons behind it.

Fake WhatsApp forwards in the past have fooled many, including Union Minister Babul Supriyo who fell for one last year. Mr Supriyo took to Twitter to share a message that declared January 1, 2018, to be a Sunday. The message claimed that February 2, March 3 and every date corresponding with the number of the month so on would be a Sunday in 2018. A quick glance at a calendar showed it was anything but true.

In their previous avatar, WhatsApp forwards came as spam mails, the most (in)famous one being the Nigerian king dying to transfer millions to your bank account. The phishing scam, quite common during the 2000's, has been debunked several times by experts and even Microsoft founder Bill Gates.Click for more trending news