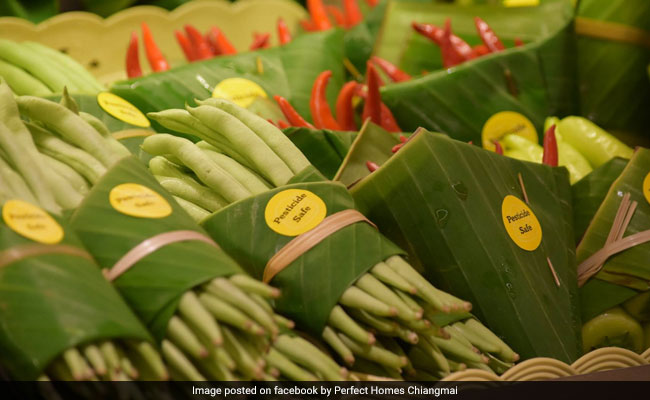 As the world turns to greener alternatives in a bid to reduce plastic pollution, a supermarket chain in Thailand has won praise for its innovative approach to the problem. The Rimping Supermarket chain in Chiang Mai has gotten rid of plastic packaging for vegetables and is now instead using banana leaves to wrap them. Their initiative has gained global recognition, thanks to a Facebook post that went viral recently.

The Facebook post by Perfect Homes Chiangmai praised the supermarket for going green and contained a few pictures of produce wrapped in banana leaves.

"When Perfect Homes spotted a rather nifty alternative to Earth-unfriendly packaging the other day at a branch of Rimping Supermarket, we couldn't help but get fired up! As well as offering shoppers the option to buy or borrow a cloth bag in store, the popular grocery outfit now bundles its Veggie First fresh greens in banana leaves finished with a fibre tie," the real estate company explained in a blog post.

Their post has been shared over 17,000 times since it was posted online. It has also collected over 600 impressed comments.

"Like this idea. No more plastic bags on produce," wrote one person. "Little steps make big difference. Change is coming well I hope for the better," said another.

On Twitter too, the eco-friendly idea created waves as many wondered when their local supermarkets would adopt such plastic-reducing measures

Another amazing idea to fight against plastic production.A Thai supermarket came up with a genius idea of wrapping its produce in banana leaves. In the past,most of the Spanish products were wrapped in paper, could we go back to this?#Sustainability#plasticpollution#PlanetEarth

Supermarket in #Thailand uses banana leaf packaging to make a difference in the over usage of #plastic. This initiative was started by street vendors and taken up by supermarkets. This will reduce #singleuseplastic. pic.twitter.com/TaOuanI37N

Five trillion single-use plastic bags are used worldwide every year, and more than 8.3 billion tonnes of plastic has been produced since the early 1950s. According to UNO, single-use or disposable plastic comes with severe environmental consequences, like polluting our oceans.

Given these numbers, do you think this supermarket's idea is a step in the right direction? Let us know using the comments section below.