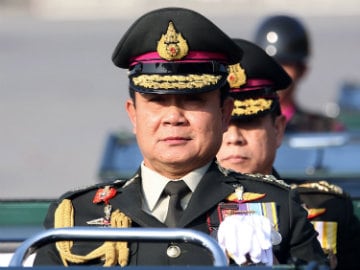 Bangkok: A ballad penned by a coup-making army chief promising to bring happiness back to Thailand has been viewed more than 200,000 times on YouTube, in the military's latest effort to put a positive spin on its putsch.

The normally stern-faced General Prayut Chan-O-Cha, who led the May 22 military overthrow of the civilian government, can now list songwriting among his talents after writing the lyrics to "Return happiness to Thailand".

The song -- featuring reassuring lines such as "we offer to take care and protect you with our hearts" and "give us a little more time" -- has proved an hit since the Royal Thai Army band put Prayut's words to music on Friday and released it on their website.

By Monday, one uploaded video on YouTube had garnered 150,000 views, while other media sources posted links to the patriotic song that generated tens of thousands more hits.

"He (Prayut) called me to see him for an hour. He wrote it with his own handwriting," said Colonel Krisada Sarika, head of the Royal Thai Army band on Friday.

Thailand's military has gone to great lengths to put some gloss on its latest coup, holding concerts with dancing soldiers and free food for bystanders.

Prayut, who is giving weekly televised addresses to the nation, has said he was forced to act after months of protest caused policy paralysis and saw nearly 30 people die in political violence.

Since seizing power from an elected government on May 22, the army has banned public protests, censored the media and summoned hundreds of politicians, activists and academics for questioning.

The nation has been torn apart since 2006 when the army ousted divisive billionaire Thaksin Shinawatra as premier.

Thaksin and his affiliated parties have won the electoral loyalty of the northern portion of the country with populist policies aimed at improving the lot of the rural poor.

But he is loathed by the Bangkok-based establishment -- and its supporters in the military -- who accuse him of destabilising Thailand through vote-buying, corruption and crony capitalism.

Thousands of people gave the general's song a "thumbs up" on YouTube while others posted comments supportive of the coup.

But Prayut's ditty was not universally popular.

Promoted
Listen to the latest songs, only on JioSaavn.com
"You should try to have an election and ask the people what they want."

The song can be heard on https://www.youtube.com/watch?v=p-JnwTmGLsU