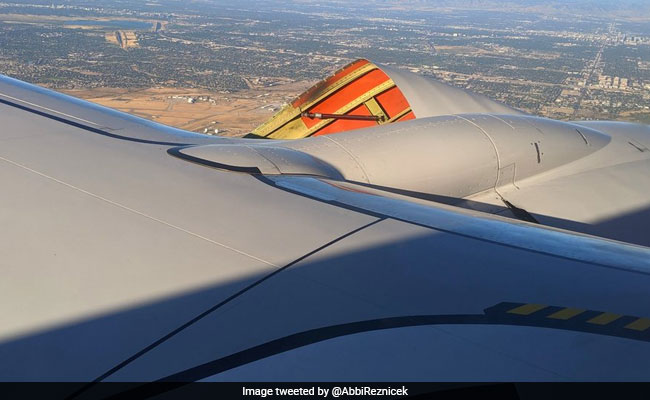 A United Airlines flight was forced to turn back after the plane's engine suffered a mechanical issue.

If you have a fear of flying, this video may give you nightmares. A United Airlines flight from Denver to Orlando was forced to turn back on Sunday after the plane's engine suffered a mechanical issue mid-air. According to Aviation 24, the aircraft climbed to 10,000 feet but returned to Denver after the left hand engine cowling opened.  A video posted to Twitter shows the left engine of the plane shaking violently mid-flight. It shows a part of the cover partially detached and peeling away.

"This morning at #DIA flight UA293," wrote Abbi Reznicek, who shared the video on Twitter on Sunday. "Engine malfunctioned mid-flight."

Abbi Reznicek also shared screenshots of the messages she received from United Airlines after the mid-air scare.

"We know returning to the airport wasn't part of your plans today, so we greatly appreciate you hanging in there!" read one of the messages. "Our maintenance team needs to address a technical issue with an engine on your plane before we depart again."

Waiting to board a NEW plane. pic.twitter.com/UnP8T17PL8

United Airlines confirmed to Fox News that the flight was forced to return to Denver because of a mechanical issue with one of the engines. They added that passengers were flown to Orlando on a different aircraft.

"United flight 293 from Denver to Orlando returned to the airport due to a mechanical issue with one of the engines. The flight landed safely and taxied to a gate where customers deplaned normally. Customers have departed on a different aircraft to Orlando," a spokesperson for United Airlines said.