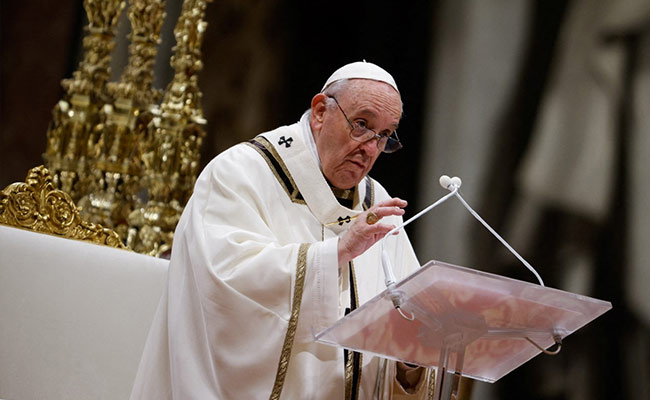 Millions of people depend on newspapers, news channels and websites to gather updates on events occurring across the world. From knowing the scoreboard to deciphering the latest political developments, people rely on news media to gather precise information. But what happens if a news outlet mistakenly gives away false information? In a recent blunder, ITV News announced the death of the Pope while the head of the Roman Catholic Church is very much alive. The live television blunder happened on the day of Christmas. Journalist Kylie Pentelow accidentally announced that the Pope had died.

Ms Pentelow was reporting live about the Pope's call on vaccination. During his address to the crowd on Christmas, Pope Francis stressed the importance of vaccine equality across all countries. He also asked more and more people to get vaccinated. The reporter said, "He said that vaccines should be made available to those most in need." She went on to say "His death was announced," before realising her mistake and excusing herself.

A clip of this incident was posted by TV broadcaster Scott Bryan on Twitter.

ITV just announced the death of The Pope by accident pic.twitter.com/GS5RNCdm5b

Mr Bryan added in a later tweet, “Someone get this newsreader a drink STAT. We all make mistakes.”

Someone get this newsreader a drink STAT. We all make mistakes.

Twitter users reacted to this blunder by recounting other memories of such broadcasting mistakes. A user wrote about a broadcaster who had mistakenly announced the death of the Queen while being a part of a regular obit rehearsal.

The user wrote, “Reminds me of when a junior BBC producer in broadcasting house tweeted that the Queen had died because she hadn't realised that what was going on around her was a regular royal obit rehearsal.”

reminds me of when a junior bbc producer in broadcasting house tweeted that the qu££n had died because she hadn't realised that what was going on around her was a regular roy@l obit rehearsal. there was a bit of a
kerfuffle over it, as far as i recall????

A news executive producer commented, "I once killed Bob Dylan in a similar fashion."

I once killed Bob Dylan in a similar fashion...

A Twitter user defended the TV presenter's mistake and said that the cue card must have contained the wrong information.

A user said that this was the most serious mistake they ever heard from ITV.

This was the most syrious mistake I ever heard from ITV

According to Mirror, the 85-year-old Pope was speaking from the balcony of St Peter's Basilica in the Vatican. He spoke about people's personal and professional relationships, and also discussed the conflicts, crises, and disagreements across the world.