Read inOther Languages
This Article is From Nov 22, 2019

Telangana Official Puts Up "I Am Uncorrupted" Board In Office

Through the course of his career, Podeti Ashok says, he has been harassed by people offering him money to get work done. 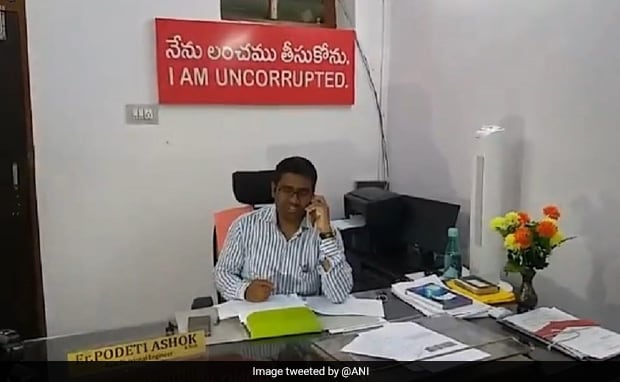 An official working at the Electricity Board in Karimnagar district, Telangana, has installed a huge board saying "I am uncorrupted" in his chamber. Podeti Ashok, an Additional Divisional Engineer in the Northern Power Distribution Corporation Limited (NPDCL) office, says that he was forced to take the step after receiving multiple bribe offers.

The bright red installation reads "Nenu Lancham Theesukonu" in Telugu (I don't take bribes) and "I am uncorrupted" below that. It was installed about 40 days ago, and has recently garnered a lot of attention on social media, reports The Hindu.

Kareemnagar: Podeti Ashok, Additional Divisional Engineer at Electricity Board has put a board, "I Am Uncorrupted" at his office reportedly after the death of Tahsildar Vijaya Reddy, who was burnt alive at her office. #Telanganapic.twitter.com/Pr9RkwiZSH

According to The News Minute, Podeti Ashok has been working in the electrical department for the past 14 years. Through the course of his career, he says, he has been harassed by people offering him money to get work done.

"In our office, every day a new set of people come to the office and offer bribes. I was tired of repeating the same thing, that I don't take bribes. Finally, when I had had enough, I thought I should put up a notice which will clear all their doubts," Mr Ashok told The News Minute.

He also said that he is facing hostility from his co-workers because of the board, as they feel he is calling the whole department corrupt.

"All I mean to say is: I am against corruption. I am not saying that the others are corrupt. I want to clarify this," said Mr Ashok.