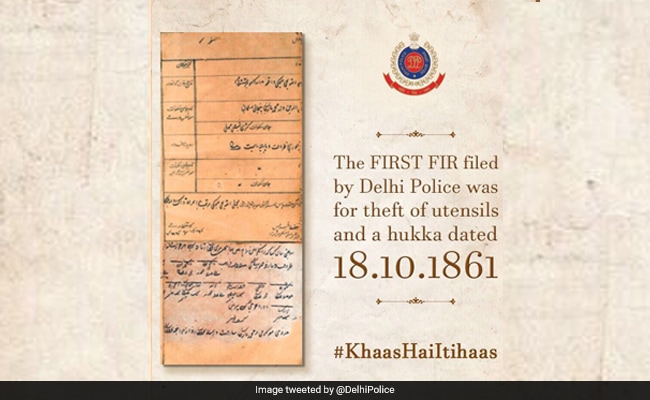 The capital's first ever FIR was filed in 1861 for theft of utensils, some clothing and a hookah

New Delhi: Here's a TIL (today I learned) lesson courtesy the Delhi Police. The Twitter handle posted an anecdote about the capital's history all the way from the 19th century. Delhi Police posted an awesome #ThrowbackThursday image of the first ever FIR (First Information Report) filed in Delhi.

Written in Urdu, the FIR was filed on on 18th October, 1861 for theft of a Hookah (smoking pipe), some utensils, some women's clothing and, wait for it, a kulfi.

#ThrowbackThursday with some of the rare moments in the history of @DelhiPolice. #tbt#KhaasHaiItihaaspic.twitter.com/V78SbRIbTq

The FIR was filed 156 years ago at the Subzi Mandi Police Station in North Delhi. It was registered by Maeeuddin Wald Mohammad, a resident of Katra Sheesh Mahal. Can you guess how much the stolen articles cost? A mere 45 aanas. (about Rs 2.81 back then)

However, there is no mention if the case was cracked.

Promoted
Listen to the latest songs, only on JioSaavn.com
The document was framed and put on display at Delhi Police Museum. A photo of the maiden FIR also adorns the wall of Subzi Mandi Police Station.

And as the hashtag completed 10 years of its existence, full points to Delhi Police for their innovative hashtag #KhaasHaiItiHaas (translating to 'history is special').Click for more trending news