Read inOther Languages
This Article is From May 27, 2019

"Stunning" Perfectly Symmetrical Pic Of Eagle And Its Reflection Is Viral

"I am awed at this photo. Absolutely stunning," writes one commenter 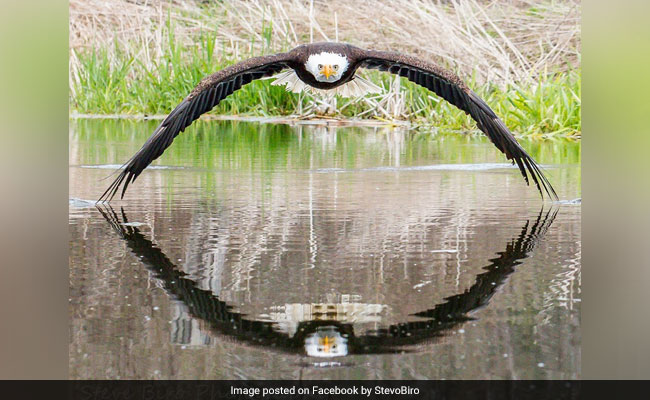 Mr Biro caught the picture during a trip to the Canadian Raptor Conservancy in Vittoria in the beginning of May, reports CTV News. An amateur photographer for 10 years, he had an vision in mind already that he wanted to capture.

"The year prior, the water was quite ripply. I found myself I wasn't in a great position to get the image that I was really hoping for," said Mr Biro to CBC News.

"This time I sat myself right down by the water. I laid down on a rock right at the water's edge and got nice and low."

His dedication and long wait were rewarded when he managed to get just the shot he wanted.

"I am awed at this photo. Absolutely stunning," wrote one commenter on Instagram. "Stunning shot," praised another.

"I got the image I wanted and I was still surprised by the overall reception and the way it resonates with the people all over," said Mr Biro.

What do you think of the symmetrical shot? Let us know using the comments section.