The animal was christened "Skippy" by Dutch Rail's Twitter feed 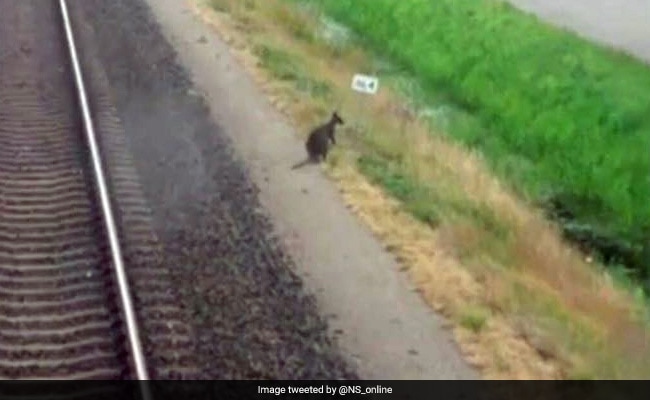 The Hague, Netherlands: Dutch police are looking for the owner of a stray wallaby which made an unexpected appearance in a small town over the weekend, disrupting rail traffic before finally being lassoed by a local.

Trains near Staphorst in the northern Netherlands were delayed for at least half-an-hour Saturday afternoon after a driver spotted the small macropod hopping along the tracks before disappearing into the small town, Dutch media reports said.

The animal, by then christened "Skippy" by Dutch Rail's Twitter feed, was again spotted by locals who were having an afternoon beer at a nearby cafe and who phoned local resident Patrick Dunnik to come help trap the wandering wallaby.

"I live just around the corner, so I ran out to help," said Dunnik.

"We failed several times to trap it, including once when it jumped right over the outstretched arms of a friend of mine," he told AFP.

Dunnik devised a lasso from rope and managed to snag the animal round a leg before finally bringing it down.

"It took both me and my two friends to hold down the wallaby because it was incredibly strong," he said.

Police and the Dutch "animal ambulance" arrived a short while later to take "Skippy" to an animal shelter.

"We're keeping it a few days at the shelter so it can de-stress," regional animal ambulance coordinator Edwin Budel said.

"At the moment, we have no idea who the owner is and how the animal got there," added Budel, who urged the owner to contact local police.

More than 500 wallabies are known to be kept in The Netherlands mainly by animal parks, according to the Dutch NOS newscaster. Some have escaped from time-to-time.

In a recent unfortunate incident involving a wallaby escape, one of the animals inadvertently hopped into a lion enclosure in an eastern animal park in March where it was promptly hunted and eaten.Click for more trending news