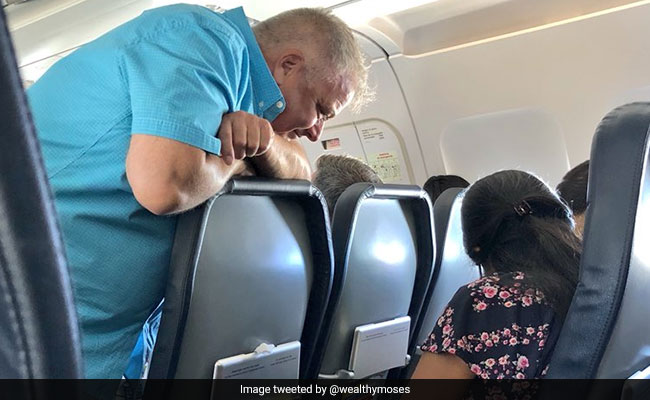 What's even more heartening than his gesture itself is his reason to do so.

If you're not having a particularly happy day, here's the perfect story to uplift your mood. A tweet posted over the weekend details a kind-hearted stranger's random act of kindness for a distressed two-year-old on a flight. His selfless action has brought joy to many and has made the tweet go insanely viral.

Twitter user Wesley Thomas posted photos along with a tweet describing the heartwarming moment. In his tweet, he mentions that during a flight to Tampa in Florida, US, his little niece "started to fuss".  The stranger noticed and turned to the family. At first, they thought the man would reprimand the family. However, to everyone's surprise, he asked if the little girl would like to draw. He even proceeded to take out a tablet from the overhead bin and handed it to the little girl.

What's even more heartening than his gesture itself is his reason to do so. "I have 4 daughters," he told the family. Take a look at precious moment captured at the time.

On route to Tampa, and this man noticed my niece starting to fuss. He turned to what we thought would be a scolding, but says "would she like to draw?" He pulls out a tablet from the overhead bin and hands it to her. "I have 4 daughters " he said. Y'all, look at his face. pic.twitter.com/dVqo9g1B8H

Since being posted on May 19, the tweet has collected over 3.5 lakh 'likes' and more than 87,000 retweets - and still counting.

A man, appearing to be the same passenger on the flight, replied to the tweet. "I was just sharing love as I was taught by my parents," he tweeted.

You've humbled me by tweeting this... I was just sharing love as I was taught by my parents. Always remember, we can change the world one small act of kindness at a time. Bless your family!

The kind gesture has touched a chord with many on the Twitter.

Promoted
Listen to the latest songs, only on JioSaavn.com
"Thank you for posting this. We need to see people doing good. Again, thank you," one Twitter user commented. "This made me tear up. Look at how happy he got making someone else happy. There ARE still good people out there. I wish more people chose to be one. Bless you, sweet man," commented another.

Tell us what you think of this story in the comments section.Click for more trending news