"I've cleared my loans over time, but it's still taking a lot to make ends meet," says Vishwaraj Jadeja. 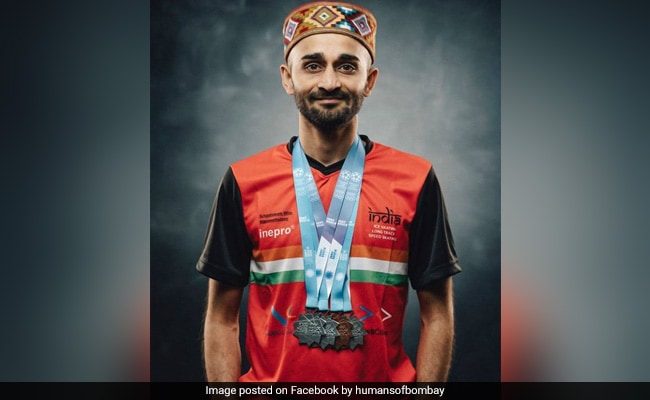 Vishwaraj Jadeja is better known as a the man who put Indian on the map of ice skating. The 34-year-old recently won four medals at Winter World Masters Games - a first for India. Now, Mr Jadeja has opened up about the difficult journey that led to the big win and his hopes for the future in an interview with Humans of Bombay.

Despite coming from a family for athletes, Vishwaraj Jadeja's parents wanted him to take up a more conventional career - well aware of the difficulties that athletes face. "My family made it very clear that becoming an athlete would mean an uncomfortable life," he says. "But as a kid, I'd spend at least six hours a day playing sports. I was only five when I dreamt of representing India in the Olympics."

When he was 23, Mr Jadeja moved to Denmark, despite his parents' apprehensions. "Mom and dad reminded me of the times our family struggled to even get furniture for our home," he says. But once they saw that he had already bought a ticket and secured a student loan, his parents gave in.

To cover his expenses in the Scandinavian country, Mr Jadeja worked odd jobs. He delivered newspapers, babysat children and worked at a bar while also practicing ice skating. "Most days, I slept for four hours," he says.

He was unfortunately disqualified from the first event he participated in. "I was a roller skater, not an ice skater," he says. The next day, however, his story appeared in an article that touted him as "The Indian Who Ice Skates" - and it caught the eye of a journalist in Holland, who got him in touch with a coach.

The coach told Mr Jadeja: "If you're crazy enough to move countries for this sport, I'm crazy enough to coach you." He even waived off his fee so the Olympic hopeful could train with him.

At this point, Mr Jadeja quit his university and moved to Holland to train at Utrecht - a place that can be called the Mecca of Ice Skating.

After eight years of training - and multiple championships in between - Vishwaraj Jadeja became the first Indian to win four medals at the Winter World Masters Games that were held in Austria in January.

He agrees that being an athlete is not an easy job. "I've cleared my loans over time, but it's still taking a lot to make ends meet," says Mr Jadeja - adding that his parents were right when they said he would not lead a comfortable life, but there's nothing else he would rather do.

What is next on the agenda for this ace ice skater? He hopes to bring home an Olympic medal.

"I will represent India in the Olympics... I will bring home the Gold," he says in conclusion. Read the full interview below:

Vishwaraj Jadeja's inspiring journey has impressed many - collecting more than 7,000 'likes' and a ton of comments.

"Proud of athletes like you, I can't believe you sacrificed everything to just represent India," wrote one person in the comments section.

"Your story is so inspirational," another remarked.

Mr Jadeja won three silver and one bronze medal at the Winter World Masters Games. He is now training for the Winter Olympics 2022.