Professor Stephen Hawking will always be remembered for his great contributions to science but do you know the scientist made several TV appearances? 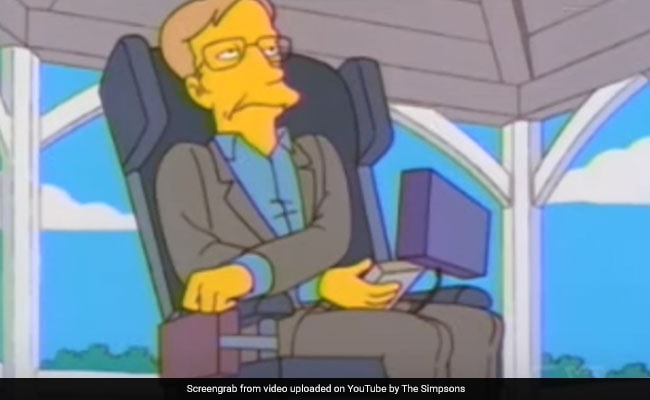 Professor Stephen Hawking in an episode of The Simpsons

Renowned British physicist Stephen Hawking, who dedicated his life to finding the secrets of the universe, has died. He was 76. The genius scientist and author of "A Brief History of Time", one of the world's most popular books, died in the early hours of Wednesday at his home in Cambridge, said his family.

"We are deeply saddened that our beloved father passed away today. He was a great scientist and an extraordinary man whose work and legacy will live on for many years. His courage and persistence with his brilliance and humour inspired people across the world. He once said, 'It would not be much of a universe if it wasn't home to the people you love.' We will miss him forever," his children, Lucy, Robert and Tim said in a statement.

Stephen Hawking's scientific contributions made him a legend not just among the luminaries of the field but also Hollywood. The scientist, who was known for his sense of humour, made several appearances in TV shows.

Stephen Hawking made seven appearances on the hit CBS comedy where he played himself. The main characters of the show, which included two theoretical physicists, one astrophysicist and an engineer, idolised the scientist. On the show's 200th episode, Stephen Hawking even sang "Happy Birthday" to Sheldon Cooper over Skype.

After the news of his demise, the show posted a tribute to the idol.

In loving memory of Stephen Hawking. It was an honor to have him on The #BigBangTheory. Thank you for inspiring us and the world. pic.twitter.com/9rWoYqIToy

Stephen Hawking made his debut on The Simpsons was in 1999, a year after he wrote his bestselling book "A Brief History of Time". In the episode "They Saved Lisa's Brain", the scientist told Homer Simpson that his theory of a donut-shaped universe was "intriguing." He returned to Springfield three more times to make special appearances on the show he described as "the best thing on American television".

In an appearance that many may not remember, Stephen Hawking starred as his own hologram in a 1993 episode of "Star Trek: The Next Generation" where he was seen playing poker with Albert Einstein and Issac Newton.

Stephen Hawking was also the subject of many films, the most memorable being the 2014 biographical romantic drama 'The Theory of Everything'. Eddie Redmayne who played the role of young Stephen Hawking, a brilliant astrophysics student at Cambridge University, won an Academy award for his portrayal. The actor, in a tribute to the late scientist said, "'We have lost a truly beautiful mind, an astonishing scientist and the funniest man I have ever had the pleasure to meet."

Promoted
Listen to the latest songs, only on JioSaavn.com
Stephen Hawking spent most of his adult life on a wheelchair after a rare slow-progressing form of amyotrophic lateral sclerosis (ALS) gradually paralysed him decades ago. He used a single cheek muscle attached to a speech-generating device to communicate. But the physical disability never limited his professional accomplishments. He redefined cosmology by proposing that black holes emit radiation and later evaporate.

Stephen Hawking will always be remembered for his great contributions to science and will remain immortalised in his many pop culture appearances.Click for more trending news