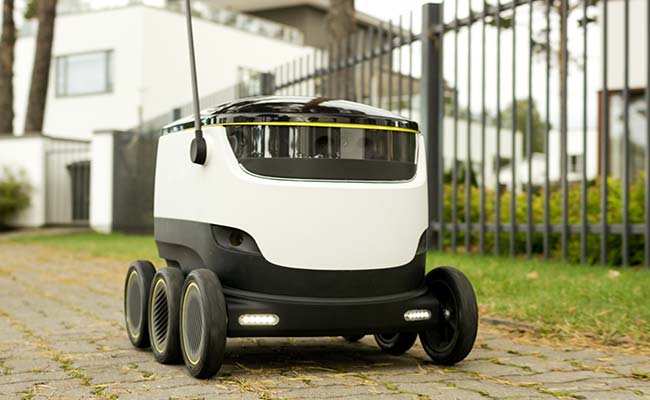 The future of delivery might involve small drones zooming above pedestrians, cyclists and motorists at high speeds. Amazon and Wal-Mart are moving down that path. Or it might be something a lot slower that travels on sidewalks.

On Monday, a London start-up founded by two Skype co-founders unveiled their self-driving delivery robot. It bumbles along at a whopping 4 mph.

That's slightly faster than a pedestrian but slower than a jogger.

Starship Technologies says the 40-pound robot could make local deliveries in 30 minutes or less. The technology could be useful for neighborhood restaurants and retailers. Because the robot is largely automated, requiring almost no human involvement, Starship Technologies said it thinks the costs of delivering goods will drop by an order of magnitude. The slow speed and grounded approach also removes some of the safety concerns with drone delivery.

A customer could follow the robot's progress on an app, and would be alerted when the delivery arrived. The cargo bay is locked to prevent theft, which only the customer could open with the app's help.

Starship is designed to be 99 percent self-driving, with difficult situations handled by a remote human operator. The approach is reminiscent to one Google patented for aiding its self-driving cars in sticky spots.

"The robots will cross the streets much like the humans do: stop, look both ways, and wait until it is safe to cross," Starship Technologies chief executive Ahti Heinla said in an interview. "The robot can recognize approaching cars with its sensor suite from 100-200 meters and will cross the streets only in locations with great visibility."

Starship Technologies imagines selling the robots as a service. Businesses could pay the start-up for every delivery it makes. Or they could buy the platform and pay for the operators and maintenance.

The start-up says it will be conducting a pilot study in early 2016 in Greenwich, London, and that it's in talks with several companies about using Starship. So far the prototype has been driven more than 80 miles in London, Boston, New York and San Francisco. Starship Technologies says the Royal Borough of Greenwich granted it permission to operate its trial.

Starship Technologies maps out areas in advance so that the robot can navigate safely on its own. It relies on sensors and cameras to maintain an awareness of its surroundings. It includes speakers so that a distant operator can speak to pedestrians.

Starship is 26 inches long, 21 inches wide and 22 inches high. The company says that future models could come in different sizes. Starship isn't built to carry hot foods such as pizza, but it's planning future models with thermal insulation.

Borrowing a page from the Google self-driving car, the robot created by Starship Technologies looks cute and harmless. If our sidewalks get a lot more crowded, that good will may come in handy.

Heinla and Janus Friis are funding the start-up themselves.