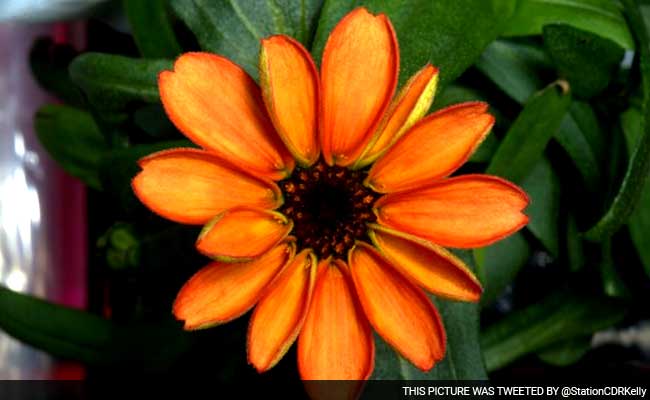 An picture of the first flower that bloomed in space, tweeted by American astronaut Scott Kelly.

Washington: You must have seen the picture of the solitary orange zinnia that astronaut Scott Kelly tweeted last week. Such activities like growing plants in space can help astronauts reduce stress, suggests NASA's Behavioural Health and Performance team.

In space, there is no scent of baking bread, no wind in your face, no sound of raindrops hitting the roof, no favourite kitten to curl up in your lap. Over time, being deprived of these common earthbound sense stimulations takes a toll.

Having limited access to stimuli to the senses has been identified as a significant risk by the health performance team.

Gardening provides recreation and relaxation, the NASA team said in a statement.

NASA astronaut Kjell Lindgren activated the growth of zinnia plants on November 16, 2015, as part of an experiment in the space agency's Vegetable Production System (VEGGIE), a facility that will help scientists learn how to grow fresh produce on orbit for the agency's journey to Mars.

Lindgren's work with the zinnias was continued by Kelly after Lindgren's departure. They are using red, green and blue LED lights 10 hours a day to stimulate growth of the plants.

The zinnias bloomed, Commander Scott Kelly announced with a tweet. "Yes, there are other life forms in space!" he tweeted on January 16.

Working with plants could provide astronauts visual, tactile and olfactory stimulation, and eventually even salivary stimulation with fresh foods and variety, the NASA statement said.

Another space gardener, NASA astronaut Don Pettit, conducted his own personal experiments with growing plants in space during Expedition 30/31.

"I grew three plants on my last mission," Pettit said. "Space zucchini, and then he had his buddy space broccoli. And then there was space sunflower," Pettit noted.

To enhance his fun, he even wrote a blog from the point of view of space zucchini.

Experiments involving space plants have been a favourite of astronauts, especially those staying in space for long periods of time.

"Lighting and other environmental parameters are more critical," Massa noted.

Lessons learned from the zinnia study will be used to help with the next flowering plant experiment in 2017, this one with an edible outcome - tomatoes - the statement - added.