The man was angry that petrol pump workers had refused to give him petrol in a bottle. 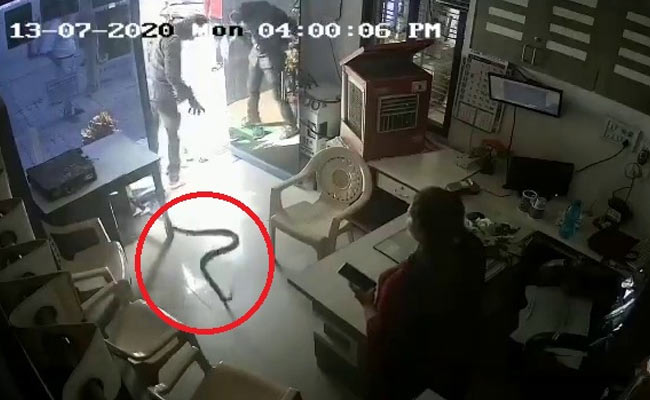 A man was filmed releasing a snake in the cabin of a petrol pump owner.

CCTV cameras have captured shocking footage of a man in Maharashtra releasing a snake inside the office of a petrol pump owner. The man was angry because petrol pump workers had refused to supply him petrol in a bottle. Annoyed by the refusal, he reportedly released three snakes into the cabin of the gas station owner.

The bizarre incident took place in Maharashtra's Buldana district. Captured on camera, it has stunned viewers on social media.

CCTV footage shows the man walking up to the door of the cabin and releasing a huge snake from a bag by shaking it repeatedly. The snake was seen immediately slithering under some furniture kept in a corner of the office after being released. Meanwhile, a woman behind the desk appeared to be startled by the intrusion. Then, looking remarkably cool under the shocking circumstances, she was filmed calmly moving out of the cabin.

Take a look at the CCTV footage below:

"Daring lady," wrote one person in the comments section, while another remarked that the person who released the snakes should be ashamed of himself.

The angry customer reportedly released two cobras and one snake of the Dhaman species into the office. While cobras are venomous and kill their prey by injecting venom through their fangs, Dhaman snakes - also known as rat snakes - are large, nonvenomous snakes.

Later, a snake rescuer was called to capture the reptiles.