A British animal hospital sent a team to capture the highly venomous reptile. 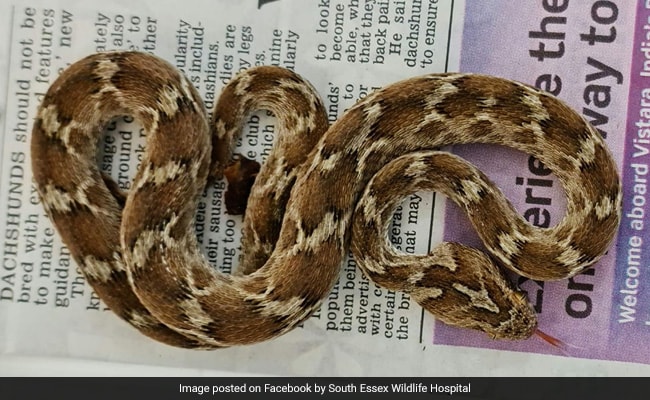 A deadly saw-scaled viper travelled from India to England in a shipping container.

A highly venomous snake made a long journey from India to England recently. The venomous saw-scaled viper got stowed away to foreign lands in a shipping container from India. Staff from a British animal hospital were called in to capture the snake. But they had to take immense precautions while handling it. South Essex Wildlife Hospital, England, in a Facebook post, has spoken about this incident.

According to the hospital, they received a call to capture a stowaway snake that was found in a shipping container from India. According to BBC, the snake was found by a stonemason in a shipping container of rocks. The hospital sent its team that consisted of a reptile expert and a veterinarian. The team at once recognised that the reptile was a non-native species in England. The Facebook post read, "In addition to many British wildlife species coming in today, we also had a call about a critter that is definitely not in the country it should have been."

The team understood that it was among the most venomous snakes in the world. "As it was identified as a saw-scaled viper and having had one before, we understood fully the gravity of just how dangerous these reptiles are," the hospital added. The post also gave more information about the snake species. It added, "They are way up there in the top few most deadly snakes (it is believed to have killed more people than all the other species combined)."

From the post, we understand that other authorities were also contacted before calling the hospital to capture the snake. The snake has been captured and been kept away from human contact. "It is now in a locked box in a sealed room ( Tom taped up the door ) with warning signs, awaiting collection from an appropriate facility that Sue, our manager, has contacted," the hospital said.

People, on the social media platform, praised the hospital staff for their efforts.

“Well done team, bet the adrenaline was running during the rescue. What a beautiful creature,” a person wrote.

Another said, “Even though I am not a lover of snakes I am so happy that it is safe and gets to live out the rest of his life after such a long journey .thank you all for being such a caring bunch of people.”

“Wow, it is beautiful. At first glance, before reading I thought it was a pretzel,” read the comment by a user.

This person was curious to know what will happen next. “What are the options? Zoo? Science facilities or destruction?”  To which, the hospital replied, “We would never rehome any animal without it being provided with the best care nor would we pts unnecessary.”

“You and your service are amazing. Hope this beautiful creature goes on to live its best life (safely),” was a reply under the post.

Once, a two-headed venomous viper surprised everyone in Maharashtra. The physical feature was due to a genetic anomaly.

Airplane Drops Human Waste On Man While Flying Over His Garden