"This bull shark came up to me and snapped my fin in half." 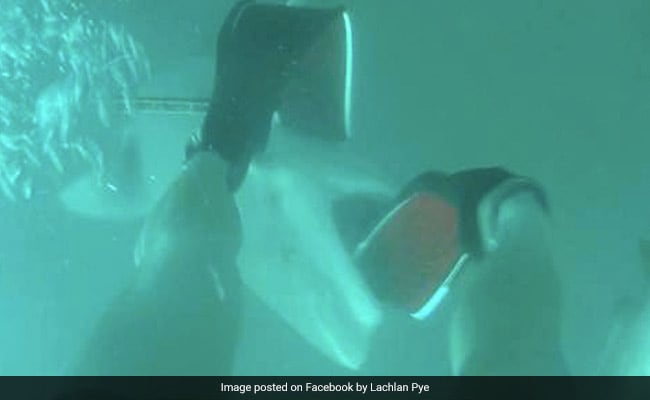 Lachlan Pye was spearfishing when a bull shark charged at him.

A student in Australia says he feared he would lose a leg when he kicked a shark in the head to escape its attack. Lachlan Pye, 18, was spearfishing off the coast of North Queensland and filming himself late last month when the 11-foot shark appeared underneath him, reports The Mirror.

Mr Pye said he was diving for coral trout and fingermark bream when the hair-raising incident occurred. "I took the easy shot and started to come up. As I came up, this bull shark charged me. It came out of nowhere," Mr Pye said, according to news website UPI.

The diver said that he started shouting and kicking his flippers frantically when he saw the shark. Describing the encounter as "two minutes of terror", he said the shark pulled his foot down and began chomping on his flippers. He managed to escape by kicking it in the head and swimming away, miraculously without any injuries, though he did lose a flipper.

"This bull shark came up to me and snapped my fin in half and took it right off my foot," he wrote on Facebook while sharing underwater GoPro photos of the shark encounter. The pics show the massive shark clamping its jaws around the diver's flipper.

The photos have collected a number of stunned responses on the social media platform.

"Glad you still got your legs. Best to move when a big shark is around," wrote one person in the comments section. "That's a close call," another said.

Mr Pye plans to continue diving and fishing despite the scary encounter.