Sea Creature With Human-Like Features Baffles Twitter. Here's What It Is

The pictures have gone viral on social media. 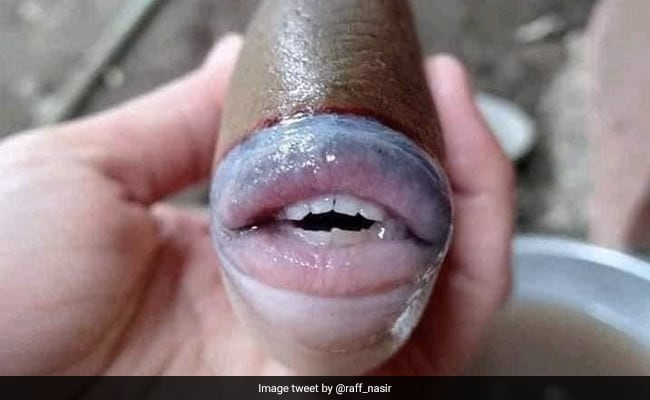 The sea creature was found in Malaysian waters.

Social media users are often intrigued by bizarre and mysterious creatures, with posts about them often garnering huge attention on the Internet. This time, pictures of a fish with bizarrely human-like features are going viral on social media. Found and photographed in Malaysian waters, the fish in the viral pics appears to be something straight out of 'Ripley's Believe It Or Not' with its lips and teeth that look distinctly human. Two pictures of the fish were shared earlier this month by a Twitter user and have since collected thousands of reactions and 'likes' on the microblogging platform.

Take a look at the viral pictures below and see if you can identify the fish:

The pictures have garnered over 14,000 'likes' and more than 8,000 comments and 'retweets'. Many in the comments section puzzled over the fish and marvelled at its teeth.

It has te te tee teeth.
It has teeth!! pic.twitter.com/w2YVGwqknK

The Rakyat Post identified the fish as a triggerfish and said that it is common around Malaysia, where the strange-looking creature is known as "ayam laut" or "ikan jebong".

The triggerfish belongs to the Balistidae family, and they are scattered around the world's seas. According to the National Geographic, these fish are famous for their "nasty behaviour" and often charge at intruders, including other sea creatures as well as human divers. They use their tough teeth and powerful jaws to fight sea urchins and crabs, but their bite can also puncture diving suits.