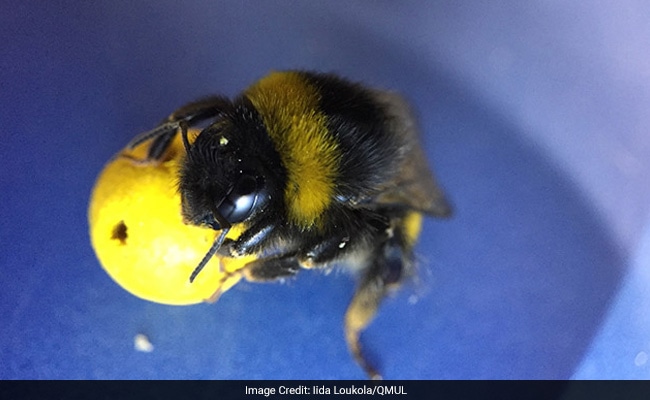 Could bees learn how to Bend It Like Beckham? One study now shows it may not be entirely impossible. The study, by researchers at Queen Mary University of London (QMUL), shows that the tiny insects can not only learn how to score "goals" but even teach other bees how to play football. Well, kind of. In the experiment, bees were trained to roll a tiny ball to a specific location, or a "goal." If they did this successfully, the bees would be rewarded with food, in this case, sugar water. Researchers found that some bees were able to do so without even being taught. Basically, bees watched as other bees completed the task and then figured out even quicker ways to move the yellow ball to the goal.

Promoted
Listen to the latest songs, only on JioSaavn.com
The fact that the bees didn’t just copy their "teacher" but improved upon the technique demonstrated "shows an impressive amount of cognitive flexibility, especially for an insect," says Dr Olli J Loukola.

"Our study puts the final nail in the coffin of the idea that small brains constrain insects to have limited behavioural flexibility and only simple learning abilities," says Professor Lars Chittka, who led the study.

The study, published in the journal Science, suggests that bees could evolve to learn new ways to survive in increasingly difficult living conditions.

Here's a short video from QMUL explaining their findings:

Don't underestimate a tiny brain. Bees, despite their sesame seed-sized brains, are much smarter than we previously thought. And the scientists behind the study hope this revelation will make humans do more to protect the environment bees live in. "Perhaps understanding how smart bees are can give us a better appreciation of them and a broader perspective on our own place in the world. It should certainly motivate us in our conservation efforts," they say.