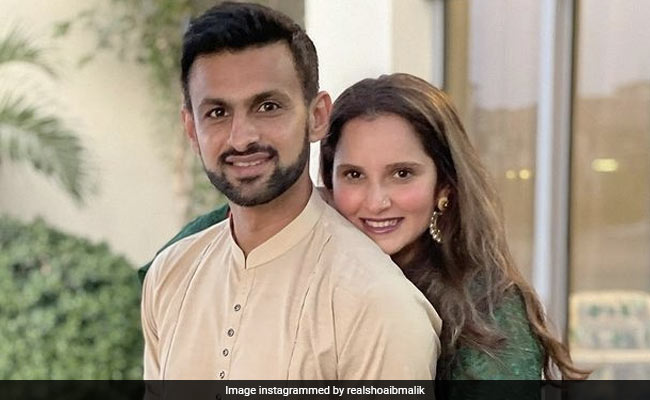 Sania Mirza and Shoaib Malik got married in 2010

Sania Mirza has reacted to a viral video in which a group of fans were heard calling her husband Shoaib Malik "jijaji" or brother-in-law. Pakistan completed a 10-wicket victory against India at the Dubai International Stadium during a match of the T20 World Cup 2021. During the Sunday match, Pakistani cricketer Shoaib Malik was fielding at the boundary when a group of fans were heard chanting "jija ji" - a term by which he has often been referred since he married Indian tennis star Sania Mirza in 2010.

Viral footage of the moment shows the cricketer turning around to look at the fans chanting jijaji for him. The nine-second clip has been doing the rounds of Twitter since the India-Pakistan match. It has racked up over 4 lakh views on the microblogging platform and also caught the attention of Sania Mirza, who seemed amused by it.

In the comments section, many praised this display of sportsmanship and camaraderie.

True audience of this game.. win or lose is part of the game we should proud of our legacy

Good one. Well played Shoaib and well played Pakistan. Deserving winners. He's been around forever. 1999. Sania. And he hasn't aged a bit. How he ran covering the boundaries in the match. Incredible.

Something similar happened during the Asia Cup 2018. While Shoaib Malik was fielding on the boundary, Indian fans took the opportunity to call out to him, saying, "jiju look here once". Much to the delight of the fans, the Pakistan all-rounder turned around and waved at them.