Photos of the shark were shared on Facebook, where they created a buzz 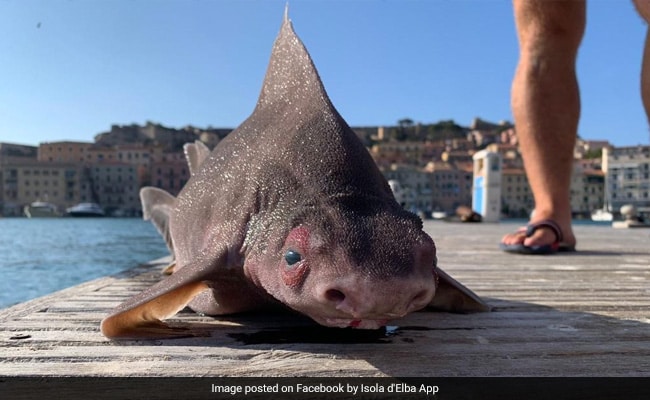 An angular roughshark was caught in Italy recently.

A fish described as having the body of a shark and the face of a pig was pulled out of the sea by Italian naval officers who were left baffled by their rare catch.

According to The Mirror, the fish was spotted in the waters at the Darsena Medicea marina in the town of Portoferraio on the Italian island of Elba. Sailors who pulled it out of water were 'creeped out' by its bizarre-looking face, but quickly dispelled the possibility of it being a mutant. The fish was instead identified as an angular roughshark, which lives up to 2,300 feet below the surface. It is sometimes known as a pig-face shark.

Photos of the shark were shared on Facebook last Friday and have gone viral on the platform with over 500 comments and more than 1,200 reactions. Many in the comments section said they were surprised by the odd-looking creature, while others criticised the naval officers, assuming that the shark had been caught on purpose.

The angular roughshark is currently listed as endangered by the International Union for the Conservation of Nature (IUCN).

Although it is endangered, Yuri Tiberto of the local Elba Aquarium said it is not uncommon to see the creature in the area.

"In the sea of the Tuscan archipelago, so rich in biodiversity... it is not uncommon to find this fish, and I can safely say that I often receive reports telling me of 'pig fish' that have ended up in local fishing nets," he told local media.

"It is commonly called a 'pig fish' because when it comes out of the water it emits a kind of grunt," he added.