A video of the Budget folder going from red to green has garnered a whopping 3.4 million views on Twitter. 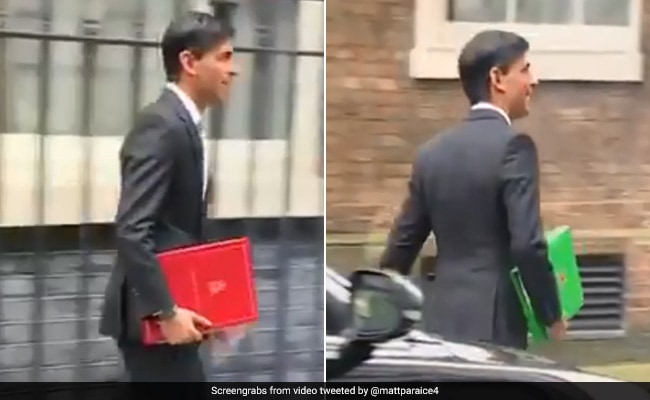 Britain's Indian-origin Chancellor of the Exchequer Rishi Sunak unveiled a 30-billion pound package on Wednesday to tackle the "temporary disruption" from the coronavirus pandemic – but what caught social media's eye was his Budget folder mysteriously changing colour on live TV. Footage filmed before the Chancellor's Budget statement by Sky News shows Mr Sunak, 39, emerging from 10 Downing Street with a red folder in hand and walking down the street. After walking past a car, however, he emerges on the other side with a bright green folder in hand.

Twitter users were left stunned by the colour-changing folder:

Can @SkyNews explain this? Watch the folder! Mind blown! #coronavirusuk#Budget2020pic.twitter.com/nLRS2MP37w

A video of the Budget folder going from red to green has garnered a whopping 3.4 million views on the microblogging platform, along with over 15,000 'likes'.

The footage left many viewers stunned.

Now that is magic

Budget Day and David Blaine would be proud of this magic 😳

How does Rishi Sunak make his folder change colour #Budget2020#budgetpic.twitter.com/eqHXGHhzTd

Others, however, were more skeptical, calling the video edited.

It's been edited, there's a slight blip if you look carefully as he passes the car. Very weird though!!

Indian-origin politician Rishi Sunak was appointed as the UK's finance minister in February by Prime Minister Boris Johnson in a Cabinet reshuffle. Mr Sunak, the son-in-law of Infosys Co-founder Narayana Murthy, announced in his Budget speech that he would do "whatever it takes to support the economy" as he warned of a "significant" but temporary disruption to the UK economy.

"For a period, it's going to be tough. But I'm confident that our economic performance will recover," he said. "We are doing everything we can to keep this country and our people healthy and financially secure."