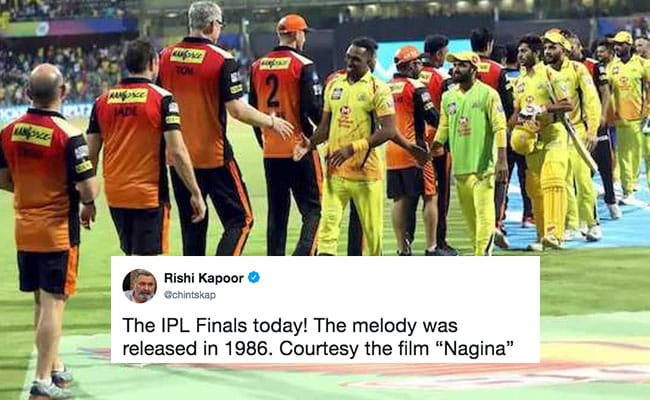 Cricket fan or not, almost everyone knows today is the Indian Premier League final. Chennai Super Kings and SunRisers Hyderabad will look to one up each other in order to win the T20 final in Mumbai's Wankhede Stadium. While fans of the game are setting things in order to watch the final, social media is going all out to support its favourite team and players. In all this excitement, veteran actor Rishi Kapoor, whose tweets are the stuff of legends, has made an entertaining discovery about the IPL theme song. Turns out the tune of the IPL anthem featured way back in his 1986 film Nagina - or so this video tweeted by the actor will have you believe.

"The IPL Finals today! The melody was released in 1986. Courtesy the film 'Nagina'," Rishi Kapoor tweeted about an hour before writing this. Why don't you just watch the video below. All we can say is... wait for it! And that you must keep the volume up for this one.

The IPL Finals today! The melody was released in 1986. Courtesy the film "Nagina" pic.twitter.com/oPXGSF1vFx

Twitter sure thinks the video is hilarious. Since being posted, the tweet has collected almost 12,000 views and some 1,100 'likes'.

"That was epic," says one Twitter user. "Super hilarious Chintu sir," tweeted another.

Are you all set for the final? Which team are you supporting? Tell us using the comments section.Click for more trending news