The giant Bathynomus is a deep sea crustacean with 14 legs. 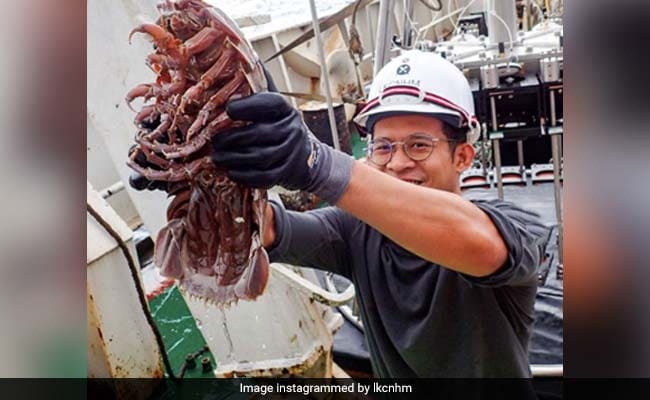 This deep sea cockroach can grow up to 20 inches long.

Researchers from Singapore have found a giant 'sea cockroach' at the bottom of the Indian Ocean - and it may make you shudder. The peculiar creature was found during a marine survey conducted by Peter Ng of the National University of Singapore and colleagues, reports Daily Mail. During the 14-day expedition to the deep sea off the coast of West Java in Indonesia, the team collected over 12,000 deep-sea creatures - of which the gigantic cockroach was one.

The cockroach has now been identified as belonging to a new species. It has been given the name "Bathynomus raksasa".

The discovery has created a buzz on social media, garnering a number of horrified reactions.

Ladies and gentlemen, may I present the Darth Vader sea cockroach. Somehow I knew he'd return as vermin.
Impressive. #StarWars#DarthVaderpic.twitter.com/uekUPvksmw

The giant Bathynomus is a deep sea crustacean that can grow up to 20 inches (50 cm) in size, making it the second-largest isopod species known to science. Though they have been nicknamed cockroaches of the sea, these 14-legged creatures are in fact more closely related to other marine species like crabs and shrimp.

The animal - whose head and compound eyes have earned it the nickname 'Darth Vader' - lives on the ocean bed and survives by scavenging for the remains of dead marine animals. They are also capable of going long periods of time without any food.

During an expedition, there are some animals which you find unexpectedly, while there are others that you hope to find. One of the animal that we hoped to find was a deep sea cockroach affectionately known as Darth Vader Isopod. The staff on our expedition team could not contain their excitement when they finally saw one, holding it triumphantly in the air! #SJADES2018

Cahyo Rahmadi of the Indonesian Institute of Sciences told the BBC that the discovery of the new species was especially significant in terms of size and the ecosystem where it was found.

According to the news website Mothership, isopods that can grow up to 50 cm are classified as "supergiants". There are now 20 species of giant isopods, including this newly-discovered one.

During the expedition, researchers also discovered 12 other new species.