Read inOther Languages
This Article is From Feb 25, 2021

"Forget the people we talked to earlier! I want to get to know this dog," said the reporter 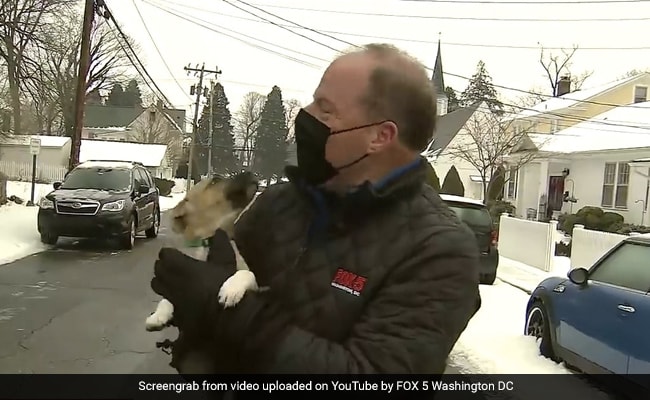 A puppy interrupts a weather report in this viral video

A wholesome video shows a puppy running up to a reporter on live TV. Fox5 reporter Bob Barnard was delivering a weather report on the icy conditions in northern Virginia when the puppy ran up to him from a nearby house. Footage of the adorable interruption, which occurred last Friday, has now gone viral on social media, racking up more than a million views on YouTube.

Mr Barnard was discussing the prevailing cold weather in Virginia in a live broadcast when the camera panned to show the puppy running up to the TV crew. Laughing, the weather reporter bent down to scoop it up in his arms.

"Forget the people we talked to earlier! I want to get to know this dog," he said as the puppy licked his face.

The gatecrasher delighted not only Mr Barnard but also the anchors who were watching the scene unfold in the studio. After a few seconds, a woman walked out from a nearby house and explained that the curious pup - named Pierogi - had jumped over a fence to join the excitement.

A video of the incident has been viewed more than a million times on YouTube, collecting over 8,000 'likes' and hundreds of comments.

"This reporter is awesome! Such a cool dude. Pierogi was having way too much fun in the snow," wrote one person in the comments section.

"Most wholesome neighborhood in America," another said.

This is not the first time that animals have made news reports better with their presence. In 2017, a clip of a news broadcast in Russia went viral, thanks to an excited black labrador trying to get some air time.