"I burst into tears when I first saw him," said his son. 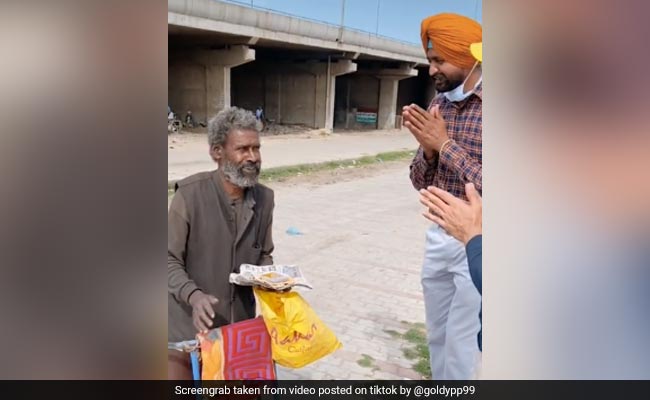 Screenshot from a video shared on TikTok by police constable Ajaib Singh.

A Punjab policeman's TikTok video has helped reunite a missing man with his family. Punjab police constable Ajaib Singh shared a video of his interaction with R Venkateshwarlu on the video streaming platform in March. The video was intended to encourage people to help the less fortunate, but it also served to reunite Mr Venkateshwarlu - who has hearing and speech difficulties - with his family after two years.

According to the BBC, Mr Venkateshwarlu had ended up in the city of Ludhiana in 2018 - hundreds of kilometers away from his native state of Telangana. After his video was shared by Mr Singh, a friend noticed him and informed his family, who had been looking for him with no success. The family then contacted police in Punjab, who helped them get in touch with the missing man.

The TikTok video that facilitated the reunion shows police constable Ajaib Singh offering food to Mr Venkateshwarlu under a flyover in Ludhiana. The Telangana native was filmed indicating that he could not speak or hear while signing his thanks to the policeman.

The video has gone viral with over 12.4 million views and more than 1.8 million 'likes' on TikTok. Thousands of people have flooded the comments section with praise for Mr Singh and well wishes for Mr Venkateshwarlu since the story of the reunion emerged a few days ago.

"I burst into tears when I first saw him," his son, R Peddiraju, told the BBC.

He explained that in 2018, his father, a labourer, had boarded a truck to another village to find work. However, he fell asleep and was dropped off in the middle of the road by the truck driver. Alone in an unfamiliar area, he asked another truck driver for a lift, and ended up in Ludhiana.

Though his family tried to find him with help from police in Telangana, they were unsuccessful until the TikTok video was brought to their notice.

After obtaining a special permit to travel during the ongoing nationwide lockdown, Mr Peddiraju reached Ludhiana to fetch his father. On Tuesday, the two returned to their village. "The first thing we'll do now is feed him homemade hot rice," says his son.