Dressed in a blue uniform, like her brother, Princess Charlotte smiled shyly and held her mother's hand. 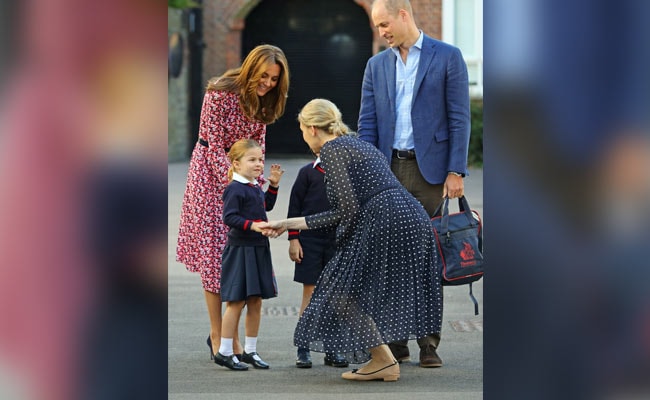 Princess Charlotte arrived for her first day of school on Thursday, accompanied by her parents and elder brother, Prince George. The four-year-old princess, who celebrated her birthday on May 2, has joined her brother at Thomas's Battersea in south London.

A sweet video shared by Kensington Palace this afternoon shows Princess Charlotte arriving for her first day of school, walking one step behind her parents, the Duke and Duchess of Cambridge. Dressed in a blue uniform, like her brother, she smiled shyly and played with her ponytail while holding her mother's hand.

According to the Telegraph, Princess Charlotte was greeted by Helen Haslem, head of Thomas' lower school, when she arrived at around 8 am on Thursday morning, London time.

"Good morning. Did you have a nice summer?" the Duchess asked Ms Haslem, before encouraging Charlotte to shake her hand.

The video has collected over 6 lakh views within minutes of being shared on Instagram, with many commenting on it to wish Charlotte luck for her first day at school.

According to the Daily Mail, Princess Charlotte will be placed in a class of 21 students and will begin by doing half days. She will be known to her classmates as Charlotte Cambridge and will have her brother to show her around, as Prince George, 6, started at the school in September 2017.