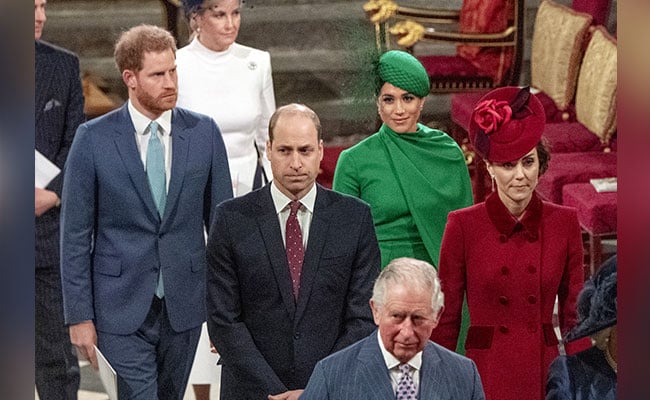 Queen Elizabeth with her grandson, Prince William, and his wife, Kate.

Prince William on Thursday defended the British royal family after his younger brother Harry and wife Meghan accused them of racism in a bombshell interview with Oprah Winfrey. "We're very much not a racist family," William, 38, told reporters during a visit to a multi-racial school in a deprived area of east London, according to news agency AFP.

Prince William's "not racist" comment drew Twitter's ire amid a wave of public sympathy in favour of Harry and Meghan, who earlier this week said that a member of the family had raised concerns about "how dark" the colour of their unborn baby's skin would be. In the explosive interview, Meghan, who became the target of sexist and racist coverage in British tabloids after marrying Prince Harry, also said that negative press drove her to the point where she began having suicidal thoughts.

Twitter users were quick to remind Prince William of his family's colonial past and troubled history with racism:

Prince William says royal family ‘very much not a racist family', but recollections may vary pic.twitter.com/k3900IqiEJ

William: we are very much not a racist family.

Others criticised him for not speaking out in support of Meghan

So Prince william can speak out to defend the royal family by saying “we're not a racist family” but he can't speak out in defence of the ONE member of the family actually subjected to racism? ????

When William says "we are very much not racist" or whatever and is then strategically photographed with a Black woman nearby, it's just part of the whole orchestration of Kensington Palace. It's also nothing new.

Why do people bother asking racists if they're racist?
1) It's not up for debate; and
2) it's not like William would say "yes, yes we are" https://t.co/sn7rYAhagn

In this instance my sympathy lies with William . If l were him l would be so hurt by the lies that were perpetuated l would be totally unable to speak to him ever again.

I believe William. The media is just trying to spin up such nonsense to monetize all of this false story

I don't know, but I don't believe Meghan and Harry. Because if the Royal family were racist they could sabotage the marriage in any way from the start.
In the end, they are a royal family and they have powerful influence

Queen Elizabeth II on Tuesday responded to the explosive racism claims from her grandson Prince Harry and his wife Meghan, saying that the issue was "concerning" but adding that "recollections may vary."

"The whole family is saddened to learn the full extent of how challenging the last few years have been for Harry and Meghan," she said in a statement.

"The issues raised, particularly that of race, are concerning. While some recollections may vary, they are taken very seriously and will be addressed by the family privately.

"Harry, Meghan and Archie will always be much-loved family members."