Prince Louis Is All Smiles In His Birthday Portrait

In the photograph, Prince Louis is seen wearing a blue sweater. 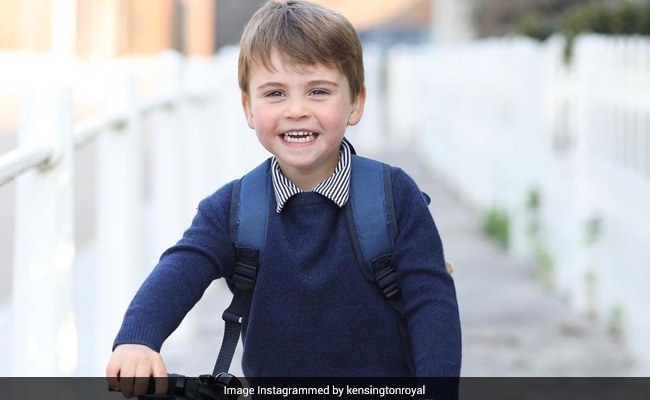 Prince William and Kate released a picture of Prince Louis to mark his third birthday.

Kate Middleton and Prince William have always posted photographs of their children on their birthdays. Continuing with the tradition, the Duchess and Duke of Cambridge posted an adorable photograph of their youngest son, Prince Louis, ahead of his third birthday. The photo was shared on the official Instagram handle of Kensington Palace. Kate took the photograph before Louis went to his first day of nursery school. The caption reads, "Three tomorrow! Taken earlier this week by The Duchess before he left for his first day of nursery, The Duke and Duchess are pleased to share a new image of Prince Louis."

In the photograph, Prince Louis, the youngest of the couple's three children, is seen wearing a blue sweater. He has a big smile while riding a red bicycle.

The photo was liked by over 12 lakh people. Their followers of were quite delighted to see the grown-up Prince Louis. A social media user wrote, "Happy birthday Louis!! Can't believe he'll be three." Another admirer wrote, "Oh my goodness he is absolutely adorable. Just like his big brother and sister." Someone even commented, "Stop. What a cutie."

Last year in July, the couple had shared a photo of their son, Prince George, ahead of his seventh birthday.

Before that, in May 2020, they had shared four new photographs of Princess Charlotte a day before she turned five. Even those photos were taken by the Duchess of Cambridge.

A few days ago, the British royal family had shared an adorable picture of the late Prince Philip with his great grand-children. The photograph was captured by the Duchess of Cambridge in 2018 at Balmoral Castle. One can spot Princess Charlotte, Prince George, Prince Louis with other little ones Isla Phillips, Mia Tindall, Lena Tindall and Savannah Phillips.

Meanwhile, Queen Elizabeth, in a note, thanked everyone for the support she received after Prince Philip's demise.

The note written by her reads, "I have, on the occasion of my 95th birthday today, received many messages of good wishes, which I very much appreciate. While as a family we are in a period of great sadness, it has been a comfort to us all to see and to hear the tributes paid to my husband, from those within the United Kingdom, the Commonwealth and all around the world."