Incredibly, not a single person was hurt. No property - including the plane - was damaged either. 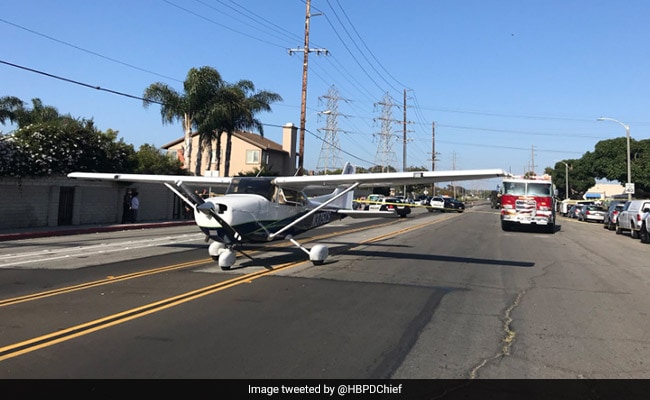 Scroll down to watch dash cam footage of the dramatic landing

A small plane made an emergency landing on a busy road in California's Huntington Beach and it was caught on camera. According to local media reports, the pilot was forced to land after her plane lost power, shortly after takeoff. Incredibly, neither the pilot nor a single person on the ground was hurt. No property - including the plane - was damaged either.

A dash cam installed in Chris Young's car captured the emergency landing. He was driving to work on Friday when he heard a strange noise. "I looked up and saw the plane literally through my sunroof," he told KCAL9. He put his hazard lights on and weaved back and forth to stop traffic. "I was kind of holding traffic back for her because I knew she was going down right there," Mr Young said.

Mr Young said he and a cyclist (also seen in the footage) made their way to the single engine Cessna Skyhawk seconds after it landed. The cyclist went to check on the pilot while Mr Young called 911 for help.


Promoted
Listen to the latest songs, only on JioSaavn.com
The plane lost power shortly after takeoff from nearby John Wayne Airport, Huntington Beach Police Chief Robert Handy revealed on Twitter.

Amazing job by pilot putting down her plane during an emergency landing on Hamilton Street in HB. The plane lost power shortly after take off from John Wayne Airport. No injuries or damage. pic.twitter.com/e1WLcxZsW9

An eyewitness, Bill Castelblanco, told The Orange County Register that the pilot appeared calm and did a really good job avoiding all of the power lines, cars and people. She did a "fantastic job," NBC San Diego quoted Huntington Beach police as saying.

This isn't the first time a pilot has been forced to land on a road instead of a runway. In January, a pilot facing engine failure was forced to make an emergency landing on a highway in California. Fortunately, no casualties were reported in the incident. Last October, a small plane crash-landed at a street in Florida, hitting cars as it did.Click for more trending news