"The dog saved the house from a potential gas explosion and gas leak." 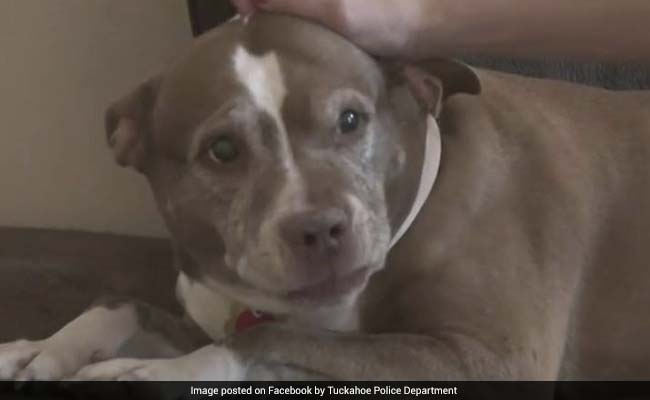 Sadie is being hailed a hero on social media for saving her family.

An 11-year-old pit bull is being hailed a hero for saving the lives for her family. The dog, named Sadie, has been credited for sniffing out a gas leak in the basement of their home in Tuckahoe, New York. She has now gone viral online for her good deed and has won hearts around the world.

According to a Facebook post by the Tuckahoe Police Department, officers received calls about a dog barking on the loose on Fairview Avenue at around 3.45 pm on Wednesday.

When officers returned Sadie to her home, they noticed a sliding door in the backyard was open. As officers were walking the perimeter of the house, they smelled an odor of gas coming from an open basement window.

The police determined, with the help of Eastchester Fire Department and Con Edison, that the gas leak coming from the basement.

"Sadie - Great work sniffing out danger and getting help! If we are ever in need of a K9, we will put you at the top of our list!" the police said in their Facebook post.

Since the post was shared online, it has collected hundreds of comments and thousands of 'likes'.

"What a smart dog you have! A true hero! Tuckahoe should honor her for her amazing good work!" wrote one person in the comments section. "Good girl. She was smart to do what she did," said another.
"She is a hero," said Sadie's owner Serena Costello, adding that Sadie chewed and dug out a wooden blocker keeping the sliding door shut to run out and get help for her family. "She saved our lives."