Amin Hafeez dressed up as an emperor for a news report. 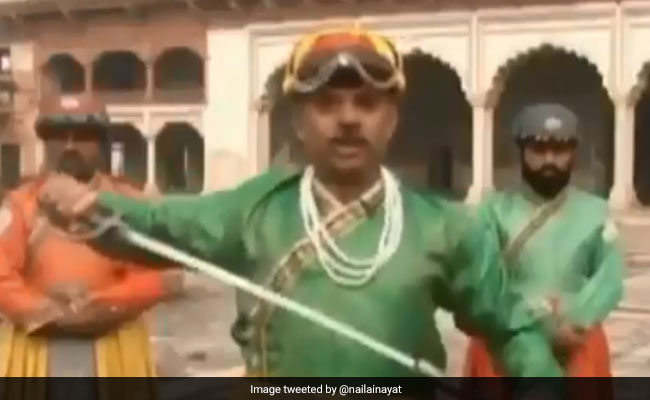 Amin Hafeez dressed up as a royal for a report on the Lahore Fort.

A news anchor from Pakistan has amused thousands by dressing up as an emperor - complete with jewellery, a turban, a sword and two attendants in the background - all for the sake of a news report.

Amin Hafeez had earlier gone viral for sitting on a donkey while reporting on animal trade in Lahore. This time, he chose the regal getup while reporting about a wedding that took place in the royal kitchen of the Lahore Fort on Thursday. According to Geo TV, the Fort has been recognized by UNESCO as an endangered monument and has been listed as a World Heritage Site in Danger. The wedding was held in violation of government regulations.

"Shahi bawarchikhaane mein shaadi kisne rachaayi? Sazaa milegi (Who held a wedding in our royal kitchen. He will be punished)," thunders Geo News reporter Amin Hafeez in videos going viral online. The anchor also brandishes his sword on camera before signing off.

His video was shared by another Pakistani journalist on Twitter. Watch the video below:

Since being shared online, the video has been viewed nearly 2.5 lakh times, garnering over 3,000 'likes'. Other versions of the video have also made their way to Twitter, with one version collecting over 10,000 views.

Here is how social media users have reacted to the video:

Hahahaa. Great. He always comes with some different and funny way of reporting. ???? good man. ☺☺ spreading smiles on many faces.

This isn't the first time a Pakistani journalist has amused social media. In 2018, Hanan Bukhari went viral for covering his own wedding - he reported from the venue, shared updates about the ceremony and even interviewed his wife and family.